A slow moving, wordy piece about loneliness, fragility and connection, I can’t say The Curtain lit up my life.

Set in a small country town, Ada Munroe (Milijana Čančar) is a widow. She lost her husband John some time ago and on the anniversary of his passing each year she visits his grave and then has a few drinks. Five years ago an elderly gent knocked on her door and asked her whether she had a room to rent, so that is how Francis (Paul Weingott) came to be her first tenant. A couple of years later he was joined by chatterbox Leon (Gil Tucker), who often talks in riddles and drives Francis mad.

Francis suffers from depression and doesn’t sleep well. He doesn’t see a bright future – in fact, far from it. Leon, who has impaired hearing in one ear and walks with the aid of a cane, is constantly trying to tell Francis what to do. He has quite a forceful personality, in contrast to Francis, who is happy enough to be left to his own devices, but finds himself drawn into Leon’s overtures.

In the three-act play The Curtain we don’t get any real back stories, only the here and now and consideration about what is to come. Mind you, Ada – after arriving home past midnight having imbibed too much following another anniversary of John’s death – does reflect upon former friends who are no longer in her life. She ends up doing something desperate and silly, before subsequently making a life changing decision that will affect the three of them.

While there is no shortage of humorous and playful interchanges – much of which I saw as white noise or mindless chatter – I found The Curtain hard going. To be candid, I was constantly clock watching, which is never a good sign. There simply wasn’t enough material there to sustain my interest for an hour, let alone 80 minutes. I was desperate for more from writer Daniel Keene*, but I found there was too little of substance.

Opening night also wasn’t the best effort from the performers, at least one of whom faltered on a number of lines. In my eyes, Milijana Čančar was the standout. Tighter direction from Beng Oh would not have gone astray.

The set by Andrew Bailey is minimalistic. It consists of older style furniture. There’s only a wooden table with six chairs, an armchair with standing lamp, and a sideboard serving as a drinks’ cupboard and an entertainment unit. Atop that sits a framed photo of John and a small table lamp. 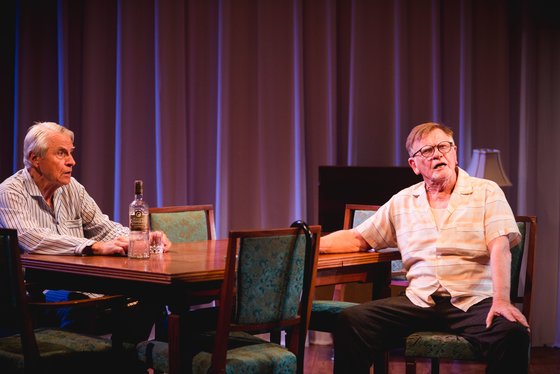 The Curtain is a small play about vulnerability in the third age, which I suggest is only of limited appeal. It is playing at fortyfivedownstairs until 15th March, 2020.