A crucible is a vessel in which substances are heated to high temperatures; when impure elements are melted away, only the pure parts remain. Metaphorically speaking, it therefore represents the perfect titular description for American playwright Arthur Miller’s award-winning classic The Crucible, a play which was itself written as an extended metaphor of the hysteria of McCarthyism in post-World War Two America, during which, in fear of communist influence on American institutions, government officials accused countless supposed sympathisers of subversion or treason without proper regard for evidence. (Miller himself was questioned by the House of Representatives’ Committee on Un-American Activities and convicted of contempt for his refusal to name others.) 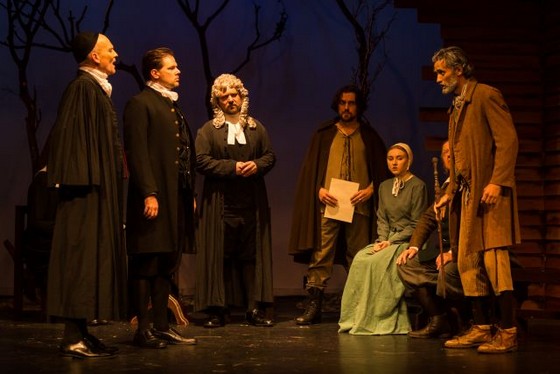 The allegorical work is a partially fictionalised narrative that tells of the witch trials that occurred in the isolated theoretic society of Salem, Massachusetts in the late 17th century. The Puritan town’s minister Reverend Parris (Greg Scurr) is shocked to discover his daughter Betty (Sarah Willson), niece Abigail Williams (Claire Argente) and their friends dancing in the forest with his Barbados Slave Tituba (Jessica Meyer). When Betty faints in fright and will not wake, rumours of witchcraft spread throughout the town. While the townsfolk succumb to the sparked hysteria as, one by one, innocent residents are condemned to death, the audience is acutely aware that the pretence stems for Abigail’s desire to be with her former employer and lover John Proctor (Reagan Warner) and want for revenge upon his wife Elizabeth (Elizabeth Best).

Undertaking a production of such as well-crafted work is far from an easy task; the play is dense with historical detail, powerful and evocative phrases and distinctive language features of archaic words and unfamiliar expressions. In the case of Brisbane Arts Theatre’s production, these challenges prove no barrier to presenting a polished piece of theatre. Indeed, the actors all beautifully animate the Puritan cadences of dialogue of double negatives and dropped gs, making for some riveting performances as complex and flawed characters struggling to make sense of their experiences.

Warner’s John Proctor commands attention. He is physically, vocally and dramatically imposing as the harsh tongued and deeply flawed but also a courageous protagonist (as with so many of Miller’s heroes), shamed by his affair with Abigail, but ultimately triumphant in his personal integrity. And as his virtuous and composed wife Elizabeth, Best is also outstanding. She plays her as more steadfast the meek (as she is sometimes portrayed), and the dramatic tension is heightened because of it, meaning that even though their characters are emotionally estranged for a large proportion of the play, Warner and Best are especially superb whenever they are together on stage.  Argente makes Abigail physically emboldened by her new found celebrity but could be more menacing in bully of her friends, to truly showcase her vindictiveness in juxtaposition to John’s saintly wife.

Whether contesting, corrupting or celebrating the law, each of the play’s judges are excellent. Scurr, in particular, rightly portrays Parris as more petty church leader rather than the paranoid and power-hungry tyrant seen in the 1996 film. In fact, there are many noteworthy performances from within the large ensemble of players. In what is arguably the most intense scene in the play, when everything is revealed, Leah Fitzgerald-Quinn is impressive as a physically anxious Mary Warren, brought to court by her master John Proctor to critically testify against her friend Abigail. Even Meyer makes Titiuba more than the easy-caricature that her minor appearances could have made her. 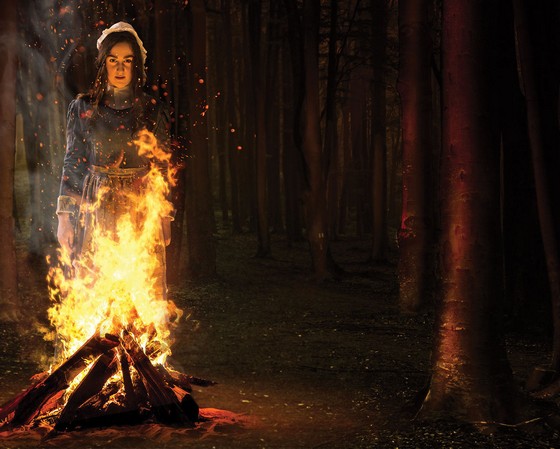 For all its acclaim, The Crucible is a long play and I am yet to see a production that does not feel long, and in some regards, this is still the case. Act One is heavy with backstory of character feuds, fractions, suspicions and some dissatisfaction with of a system of government in which priests rule in the name of God. Some off-stage dialogue helps with pacing, however, additional scenes, such as when the show begins with the girls dancing in the forest (a ritual only referred to in the original text), are unnecessary and unnecessarily stylised so at odds with the rest of the play. Rather, simple but effective staging allows the story to speak thorough performances. While the different coloured dresses of the girls are helpful in avoiding initial identity confusion for those unfamiliar with the work, they seem at odds with the strict and tense atmosphere and bleak, restrained Puritan life.

In its show of religious fervour in its worst light, The Crucible is an uncomfortable play to watch at times, however in the hands of Brisbane Arts Theatre, it transcends its specific allusions to become an absorbing, suspenseful illustration of the importance of integrity and the need for a commonsense and compassion when truth is on trial. More than a moving story about guilt and redemption, or even the miscarriage of justice that the Salem witchcraft trials represents, it is a drama about collective evil that is sadly all too topical in our post-truth times, given its indictment of group mentalities. And thanks to productions such as this one, it is easy to see why it still stands tall as a classic part of the dramatic canon.