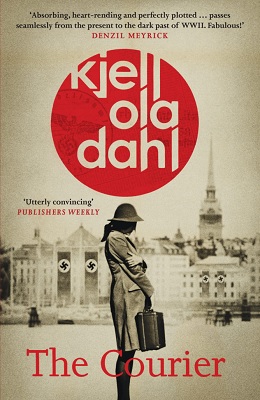 “She doesn’t answer. Death is never banal. If someone can live for more than fifty years without realising that, then it is beneath her dignity to teach them any better. ‘The water’s boiling. I’m making tea,’ she says. ‘Let’s talk later.’”

Outside of Norway, Kjell Ola Dahl is perhaps best known for the Oslo Detective Series of novels, the first of which was published in 1993 and afterwards, there were five more novels in the series. The Courier is Dahl’s latest novel and in it he tackles the very difficult subject of the Nazi Occupation of Norway during World War Two. Don Bartlett, who translated all of the Oslo Detective series, has translated The Courier to English.

Apart from the beginning and end The Courier is set in two different time periods. In 1942, two years after the occupation of Norway, and in 1967, although twenty five years after the war has ended there are still some scars which remain. In each time period there are three main characters. Ester, who as a young courier in 1942 narrowly escaped capture and transportation and to a concentration camp, Sverre, a wartime resistance leader and now bureaucrat and Gerhard, who had to leave Norway when his wife Åsa was murdered. When Gerhard unexpectedly returns to Norway in 1967, having been presumed to have been killed during the war, the events of 1942, in particular Ester’s betrayal and Åsa’s murder, are slowly revealed. At its heart The Courier is a game of cat and mouse where each character must use the skill and knowledge they learnt during the war and afterwards to outwit the other and above all else, survive.

In conclusion, espionage in war, and this is very much the case with The Courier, isn’t always a noble cause, there are also the sins of betrayal, omission, murder, deceit and theft amongst many other things. Each of them has a part to play in Dahl’s excellent novel and it is the slow revealing of each of those sins which makes The Courier a very satisfying read.