Cloverfield was a unique film. Lots of fans were looking forward to a sequel to this amusing found footage monster film. The sequel 10 Cloverfield Lane came 8 years later. It didn’t feel like this film had anything to do with the initial film. Till the end of the movie. It’s clear this one was situated after the events from Cloverfield. And then suddenly this Netflix release pops up from nowhere. The Cloverfield Paradox tries to explain why all that shit started to happen in Manhattan. Yep, again it’s about prequel and sequel stuff. And there’s nothing I hate more than prequel and sequel nonsense. It’s obvious this movie tries to connect with the original Cloverfield films. 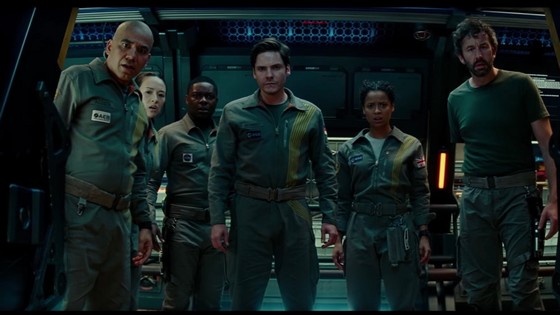 However, this film is right up my alley. A sci-fi horror on board of a sophisticated space station with crew members trying their best to stay alive. I got a soft spot for such movies. The only problem is that they don’t need to defend themselves against cruel and bloodthirsty space aliens. It’s a paradox that causes peculiarities. And they caused it themselves. They are sitting on top of a gigantic particle accelerator that, if it works decently, should provide the earth with unlimited amounts of energy. I didn’t understand how that works at all. And I doubt whether the makers of the film understood it themselves. What happens afterwards is hilarious on the one hand, and scary on the other. And it was still hard to grasp what was going on.

Because the particle accelerator failed to work, they end up in another dimension. Earth is gone and the most absurd events start to happen on board of the spaceship Cloverfield. Before they realize it, they find a teleported person behind a panel. An amputated arm is crawling around. Worms disappear and show up somewhere else. And it turns out that the gyro (a kind of compass) has disappeared. And it’s also found again in a not so obvious place. The arm turns out to be very helpful as well. It reminded me of Thing from The Addams Family and the severed hand from Evil Dead II. Sounds pretty bizarre, doesn’t it?

Eventually I had the same feeling about this film as with 10 Cloverfield Lane. They both seem to be totally self-contained films that were given a small adjustment at the very last moment in order to be linked to the Cloverfield phenomenon. Both the film from 2016 and this one had a different film title initially and were given a variant with the term Cloverfield in it. Was it a panicky decision? They feared in both cases that it might cause a financial hangover? And was the link with the film, with the most original marketing ever used, a way to create a similar curiosity?

I wasn’t knocked of my feet by The Cloverfield Paradox. I even think they should have released this follow-up under the title “The God Particle” and omitted any reference to the Cloverfield universe. As a stand-alone film one could have criticized what the film is, instead of what the film wanted to be. Very bizarre, but the film itself has created a paradox. Despite everything, I was still amused by it.

The Cloverfield Paradox is now streaming on Netflix.