And when I just referenced audience participation, I meant before, during and after the 80-minute production without interval. Before the show proper starts, the audience is invited on stage to join the cast for a beer – for free – and before you know it the stage if filled with patrons imbibing and taking selfies. During the performance, the cast mixes freely with the audience and invites a number on stage to join in the frivolities. One of the most amusing moments comes when a woman of a certain age is serenaded. And then, after the show the boys pose for photos and interact with any and all wanting a chat.

No matter whether you’re feeling down this holiday season or if you want the good vibe to continue, this is a positive mood setter. They call the pub, which is effectively their home away from home, The Jungle and these lads keep coming back to the well … to drink, sing and talk. And sing up a storm they most certainly do – everything from ballads and love songs to up-tempo pop. The Choir of Man knows how to have a good time and takes the audience along for the ride.

Many of the tunes are familiar – Save Tonight, Impossible Dream, 50 Ways, Hello, 500 Miles, Somebody to Love and You’re the Voice amongst them. Each of the troupe also play instruments – piano, guitar, banjo, clarinet, trumpet, flute, ukulele, tambourine, drums and more besides. But they are just as comfortable performing a couple of a cappella numbers.

The nine harmonise magnificently and all have their time in the spotlight. Guy Salim knocks it out of the park with his mastery of tap dancing … and the clarinet. Ben Langridge is the guy who strums his guitar and playfully woos the “older” lady. Johnny Sheehy gives Adele a run for her money with his sensitive rendition of Hello … an on it goes. The surprise packet is the barman, Tom Gadie – a big man – whose ability to reach high notes and extraordinary dexterity are just so impressive.

Narrator George Bray – who, too, has a fine singing voice – starts by introducing members of the group, who also include Mikey Shearer, Tom Reade, James Hudson and Matthew Hobbs. Thereafter, he weaves it all together with a loose narrative thread that emphasises the importance and value of friends, family and tradition through good times and bad. Whilst that most certainly strikes a chord, as heartfelt as it appears, I believe the patter is a bit too much (too syrupy) and somewhat repetitive. It is overplayed. Less is more.

Overall though, The Choir of Man reminded me of another great show set in an Irish pub – Once – that I saw at the Princess Theatre five years ago. That too was warm, poignant and humourous, which are the mainstays of The Choir of Man. 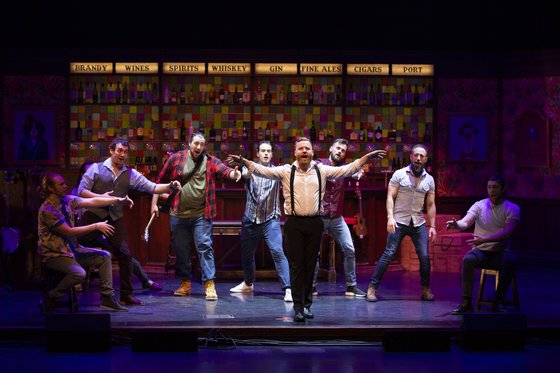 Incidentally, in this case the pub set consists of a multi-coloured glass tiled backdrop in front of a bar, with pictures and photos adorning the walls. In front of the bar are a couple of small wooden round tables and stools, and a solid wooden table. Then there’s a piano. It is a nice set up.

Directed by Nic Doodson, with music supervision by Jack Blume and choreography by Freddie Huddleston, despite my one slight reservation, The Choir of Man is feel good entertainment that is well worth seeing.

It is playing at Arts Centre Melbourne until 12th January. Next stop is Perth Ice Cream Factory from 17th January until 9th February and then Adelaide Fringe from 14th February until 15th March, 2020. Thereafter, the guys will take to the stage in Canberra, Noosa and Brisbane.