Director Richard Eyre crafts a moving and beautifully realised story of love and loss in The Children Act. The film concerns a highly intelligent couple at a fork in the road … and a 17 year old Jehovah’s Witness with leukemia. 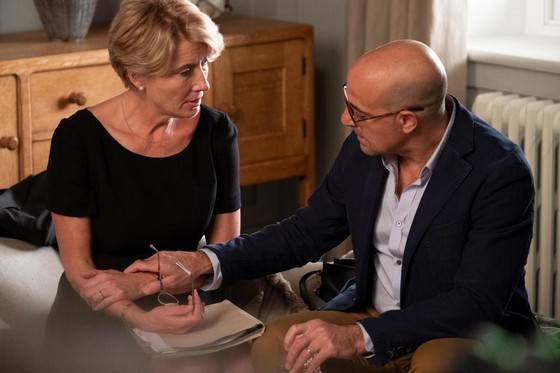 Fiona Maye (Emma Thompson) is an eminent High Court judge in London. She presides with wisdom and compassion over ethically complex family law cases. Her life revolves around making just and sound decisions at work. However, her fastidiousness and renown have come at a heavy cost to her personal life. The intrusion of her workload has pushed her marriage to American professor Jack (Stanley Tucci) to tipping point.

In a moment of personal crisis, Maye is asked to rule on the case of Adam (Fionn Whitehead). The brilliant lad is refusing the blood transfusion that will save his life on religious grounds. Adam is nearly eighteen, but still legally a child.

Eyre’s film is based on Ian McEwan’s novel The Children Act, published in 2014. The novel’s title recalls the UK’s Children Act of 1989, which revolutionised the law relating to children by putting the welfare of the child above all else.

Emma Thompson brings all her prowess to her role. The judge feels deeply, but much of her character is internalised. Stanley Tucci has a tenacious charm in his representation of her husband. Fionn Whitehead channels wonderment and possibility into the youngster with such promise for his life ahead. His character’s head is filled with unanswered questions.

As screenwriter, Ian McEwan does a fine job translating his book to the screen, which Eyre (Notes on a Scandal) sensitively realises the script. The film features several memorable scenes which draw you in. The production values are sensational. It’s a beautiful looking picture. The ending isn’t as easy to work out as most of the film. It requires some unpicking, but that didn’t unduly concern me.

In summary then, The Children Act is not only thoughtful, but thought-provoking.