A sensitively woven tale of love and loss, The Cakemaker leaves an indelible impression. 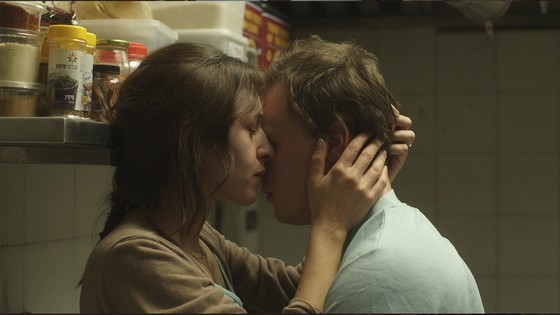 Thomas (Tim Kalkhof), a young German baker, is having an affair with Oren (Roy Miller), an married Israeli man who frequently visits Berlin on business. When tragedy befalls Oren in Israel, Thomas travels to Jerusalem seeking answers regarding his death. Under a fabricated identity, Thomas infiltrates the life of Anat (Sarah Adler), Oren’s widow, who owns a small café. Thomas starts to work for her, creating German cakes and cookies that bring her café to life. Before long, he finds himself involved in Anat’s life in a way far beyond his anticipation. To protect the truth he will stretch his lie to a point of no return.

The Cakemaker tells of characters that want to put aside their definitions of nationality, sexuality and religion. First-time feature writer-director Ofir Raul Graizer based the script on a personal experience. The film gradually works its way into our psyche. The longer it goes, the more affecting it is – in fact, surprising so.

To me there was something almost sinister about it at the outset (I was waiting for something bad to happen). Then the tone changes.

Tim Kalkhof imbues Thomas with a quiet solitude; suggesting he doesn’t feel anything, when, in fact, the reverse is true. Sarah Alder displays vulnerability and a determination as a caring mother nursing a raw wound. Zohar Shtrauss is pitch perfect as Anat’s brother, Moti, who tries to protect the sanctity of the café and Anat. Religion  plays a major part in story. The whole thing feels real.

In director Graizer’s hands, the metaphorical cure for personal tragedy is baking. It’s a sensual and visual act. Baking has a special meaning in Judaism, due to traumatic memories of severe lack of food during the Holocaust. And when it comes to the religious aspect of baking, a set of rules dictates what is allowed and what is forbidden.

Importantly, you don’t know where The Cakemaker is heading. It’s a special film, which is beautifully realised in a searing debut by Graizer.