The Bookshop is set in the sleepy small coastal village of Hardborough in 1959. Florence Green (Emily Mortimer) is a war widow who relocates to this small town with the aim of opening a bookshop. She loves books and wants to share this love with the townsfolk. She takes possession of the decaying old residence known locally as “the old house” and transforms it into her bookshop. She hopes to introduce the townsfolk to some great works of literature. 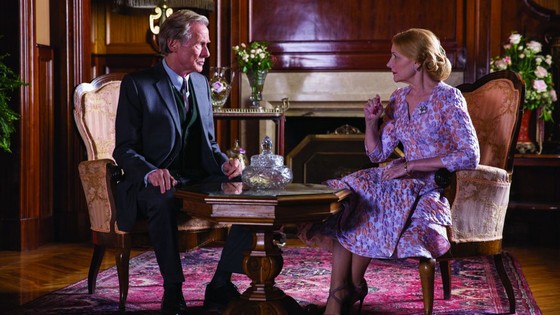 However, Mrs Gamart (Patricia Clarkson) has other ideas. A powerful figure in the town, she had planned to turn the old house into a local arts centre. She uses her wealth, power and influence to subtly try and thwart Florence’s plans. Florence receives help in the shop from young local girl Christine (Honor Kneafsey) an outspoken child who works as her assistant.

Florence finds an unexpected ally in the reclusive Edmund Brundish (the wonderful Bill Nighy), an avid reader himself. She introduces him to authors like Ray Bradbury and Nabakov, which he devours even though he says that the locals may not understand them. A platonic friendship develops between the two. But Brundish and Florence find themselves pitted against the stuffy small-minded attitude of the town’s residents and the manipulations of Mrs Gamart.

Traditional bookshops seem to be dying a slow death with the increasing popularity of e-readers. This adds a rather melancholic tone to this bittersweet, but slightly uneven adaptation.  Penelope Fitzgerald’s bestselling 1978 novel (short-listed for the Booker Prize) provides the source material. Spanish director Isabel Croixet (The Secret Life of Words) also serves as screenwriter. Her script remains reasonably faithful to the source material. She suffuses the material with a genteel surface but gives it a darker heart. She brings an outsider’s perspective to this quintessentially British setting. The references to Bradbury’s classic novel Fahrenheit 451 and its censorship theme subtly hint at one of the film’s main themes as well.

The Bookshop boasts some great production design from Llorenc Miguel. Cinematographer Jean-Claude Larrierand imbues this vision of provincial post-WWII England with a hint of grimness. Ireland’s windswept coast doubles for the picturesque village of Hardborough here. It’s probably not surprising that The Bookshop became the first English language film to win the Goya, the Spanish equivalent of the Oscar.

Croixet draws excellent performances from her cast. Mortimer is superb as Florence who finds herself frustrated by the manipulations of Mrs Gamart. Clarkson’s despicable character has a polite veneer, but she is sort of like the steel fist encased in a velvet glove.Clarkson portrays the conniving woman really well, giving the character a hard edge. This is the fourth film featuring Mortimer and Clarkson; both recently appeared in Sally Potter’s The Party. Nighy tinges his character with a wistful edge as well as a slightly cynical and ironic edge. Julie Christie’s dry wistful narration gives us insights into the nature of the town and its small-minded inhabitants. Only at the end do we realise who her character actually is.

But I found The Bookshop slightly old-fashioned in style and a tad dull.