The publicity blurb for Kyle Perry’s thriller debut The Bluffs describes it as a cross between Picnic at Hanging Rock and Mean Girls. The hook is four teenage girls missing in the inhospitable landscape of Tasmania’s Great Western Tiers and the aftermath of their disappearance, coupled with a bit of horror-inspired local folklore. Whatever Perry’s influences were, he goes well beyond them to craft a unique and original crime thriller set in the wilds of northern Tasmania. 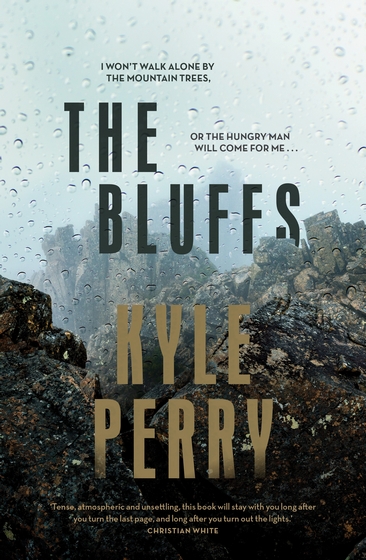 When The Bluffs opens, teacher Eliza Ellis is walking barefoot and disoriented on a hiking trail in the Western Tiers. She is found by a student but does not know what has happened to the four girls in her care who have all disappeared. Before long there is a full scale search for the four girls driven partly by a social media campaign being orchestrated by the twin sister of one of the missing girls, Madison. A point of view chapter from before the hike shows Madison to be a manipulator and a bully, and as the investigation progresses, her social media interventions will skew how the public and the police perceive the situation and the key players. Besides Eliza, another of these key players is Murphy, father of one of the missing girls but also the town supplier of marijuana, which he does in competition with one of the local police officers. Into this small town maelstrom steps mainland detective Con Badenhorst, carrying his own demons from a previous case involving teenage girls.

The main narrative of The Bluffs alternates between the viewpoints of Murphy, Con and Eliza. All three of these characters carry a darkness but also have to deal with dark deeds in the town. These deeds involve paedophilia, teachers behaving inappropriately with students, blackmail and vigilantism. As the plot unspools, Perry keeps the twists coming, with his three protagonists right in the centre of the action.

The fact that there are teenage girls missing in the Australian bush is probably where the comparison to Picnic at Hanging Rock starts and ends, despite the underlying rumours of an ancient evil in the area. In terms of plot, The Bluffs is a little more prosaic than the dreamlike and slightly more innocent Picnic at Hanging Rock. But Perry does make a star of the landscape. His prose brings this beautiful but dangerous part of Tasmania to life.

The Mean Girls influences, or at least the portrayal of teens behaving badly, particularly using social media, are much more pervasive. The revelations about how teens use social media are particularly scary. This is where Perry’s experience as a counsellor, particularly in high schools comes through. There feels like a deep truth here in the way the teens behave towards each other and the world at large, even in the heightened atmosphere of a thriller.

All comparison’s aside, The Bluffs is an atmospheric, twisty, page turning debut. Perry explores some dark paths with his cast of broken characters, who all hide things not only from the reader but from themselves. The secrets are well kept and the twists are cleverly deployed to keep the reader off balance particularly with respect to some of the later revelations. And as already mentioned, the fully realised setting of the Western Tiers is almost a character in itself. It will make some readers want to visit to see the area for themselves but for some others to wish to stay as far away as possible.