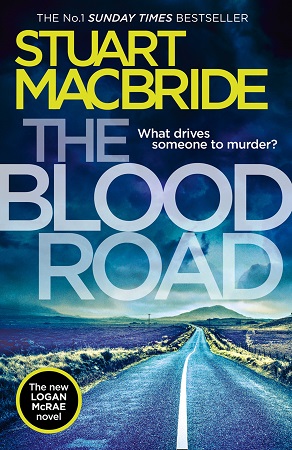 Look, we all know what I’m going to say here, so let’s just get straight to it.

The Logan McRae series is the bees knees of Scottish police procedurals. The plots are intricate, often confrontational (as is very much the case with this one) and the characters are brilliant. Grumpy, put upon McRae (is that a new girlfriend we spy, god knows what’s going to happen to her then) to AKA Detective Sergeant Simon Occasionally-Useful-When-Not-Being-A-Pain-In-The-Backside Rennie, DS Roberta Steel (demoted / still over-the-top) and PC Quirrel (together they are North East Division’s answer to Blackadder and Baldrick), all make an appearance in The Blood Road.

Quick bit about the plot – McRae’s now works for Professional Standards (followers of this series will be aware that’s …. a tad of leap in it’s own right…), so when DI Bell turns up dead in the driver’s seat of a car, stabbed, it’s a bit of a surprise to all. What with them having buried him two years ago, or so they thought. Needless to say a bit of a shufty around in Bell’s past is called for, which is right up Professional Standard’s corridor (so to speak). When that expands to include the investigation of the possible suicide of a currently serving officer, McRae and his little team of mad buggers find themselves knee deep in dodgy coppers, old cases, odd goings-on, and unfortunately the series of missing kids that the major crimes division is also investigating. There’s a lot of cross over, crossing under, crossing off, and generally getting cross – as you’d expect from a Stuart MacBride novel.

There’s also the question of missing kids, and the possibility that something seriously horrible is happening to them, so if you’re a reader who doesn’t like that sort of (fictional) plot then this may not be the novel for you. Which will be a pity because you’ll be missing out on a heap of wise-cracks, an impressively bolshie young lady, some dedicated coppering, some seriously manipulative behaviour (Steel wants a night out with the wife, whether McRae likes the idea or not), and some clever thinking and persistence as you’d expect.

But then again you knew I was going to say all of that, and you know I’ve already pre-ordered All That’s Dead – 12th book in the Logan McRae series.