What an amusing movie The Banker was. It’s the kind of movie you start watching and before you know it, the end credits roll across your screen. Even though the subject won’t get you very excited. The world of real estate and banking. A world populated with stiffs in perfectly fitting suits who prefer to juggle with repayment schedules and capitalization rates while using a jargon that a normal human can’t make heads or tails of. I sometimes have my doubts about whether they understand it thoroughly themselves. And the reason why it became an entertaining film is not only due to the packaging but also because of the Holy Trinity: Anthony Mackie, Samuel L. Jackson, and Nicholas Hoult. A colourful (pun not intended) cast that effortlessly works through dialogues and plays so naturally that it seems as if they have been working together for years. 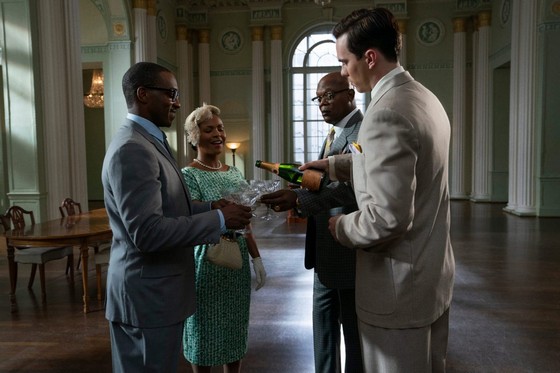 In addition to the real estate market as a subject, there’s also the issue of racial discrimination that was still visible in the U.S. in the ’50s. A black man who wants to settle in a white neighborhood wasn’t so obvious. Let alone that he could also take out a loan to buy and sell real estate in such a neighborhood. Hence the idea of Bernard (Anthony Mackie), a Texas-born African-American who is firmly convinced to succeed in his intent to make money from doing business rather than manual labor, to recruit Joe Morris (Samuel L. Jackson) as a business partner and use Matt Steiner (Nicholas Hoult) as a straw man. Well, they aren’t exactly ideal partners. The first is a flamboyant bon vivant and blabbermouth who comes across as an untrustworthy slick. And Matt is a hard worker with a good heart. Only he’s not really blessed with a top-level brain like Bernard.

The first half of the movie is the more light-hearted part. The start of the Bernard Empire and the process of turning Matt Steiner into a convincing businessman. For me, this was the most hilarious part. The golf lessons where Samuel L. Jackson excels as the extravagant golf teacher and the math part Bernard takes care of. The amusing discussion that Steiner had with a wealthy man while trying to buy his building, was the ultimate climax of this period of training. And when this first chapter is over and the gentlemen are gradually taking over the real estate market in California, the next chapter pops up. The more serious part of the movie.

The first part not only showed how the two gentlemen managed to circumvent the discriminatory way of doing business in a devious way. It also showed how black people were deprived of the right to develop themselves in American society during that period. Loans and property sales were simply forbidden. Bernard’s plan to subsequently buy a bank in Texas, where segregation was still very much present, in order to support his black fellow man, is what you see in this tailpiece. Needless to say, this wasn’t a smooth operation.

The Banker is based on real events and I believe it truly shows how things went in the U.S. and how people were deprived of decent housing. Perhaps Bernard Garrett intended to act as a benefactor and pave the way for African Americans. Maybe he was doing it out of self-interest, too, simply to prove to himself and his father that you could succeed if you firmly believe in it. Anyway, The Banker is a great movie with a serious part and a very entertaining part. But as I mentioned earlier, it’s the cast that takes the whole thing to a higher level. A must-see for sure.

The Banker is now available on Apple TV+