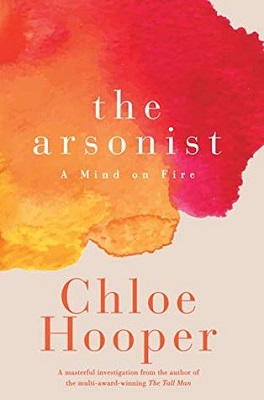 Chloe Hooper has, yet again, taken on difficult terrain and a complex subject matter in The Arsonist.

As in The Tall Man, there are victims, family members, affected communities and people still trying to get on with their lives, Black Saturday being ten years ago this month / year in the one of the most fire prone areas on the planet. As rural dwellers the potential of fire is never far from mind. We live for long, hot, draining months in each year sniffing the air, watching the horizons, analysing weather forecasts and planning actions and survival. We do that knowing that fires can be started by a range of natural causes which nothing can be done about. And then there are the ones started by the arsonists. That, thankfully, small group of people who have all sorts of reasons for starting fires, as with the subject of The Arsonist – an intellectually handicapped, socially isolated man from the Latrobe Valley – one location of the many that went up in flames on that stinking hot February day.

In The Arsonist Hooper balances the analysis of the man who set the fires in Churchill, against the people and places affected by them. This contrast, of people who lost everything, people who lost family, friends and livelihoods, now looking for reasons why; against the man now serving a prison sentence for a crime that it’s hard to tell if he knows he committed, understands why, or is fully aware of what he was doing and bloody good at covering up, is stark and sobering. Everybody is confused by the arsonist’s motivations – detectives interviewing him couldn’t decide if he was covering up or genuinely disconnected, his trial didn’t ever really establish motive, and his behaviour on the day in particular, incomprehensibly odd.

The Arsonist is a powerful book – Hooper has carefully negotiated the task of opening up old wounds and paying respect to victims and survivors, whilst also clearly telegraphing that there’s much to be considered when it comes to our reactions to arsonists. The last line of the blurb sums it up better than I ever could “The Arsonist is a reminder that in an age of fire, all of us are gatekeepers.”