In the animated comedy The Angry Birds Movie 2, three flightless angry birds and the scheming green piggies take their beef to the next level as both Bird Island and Piggy Island are in danger. 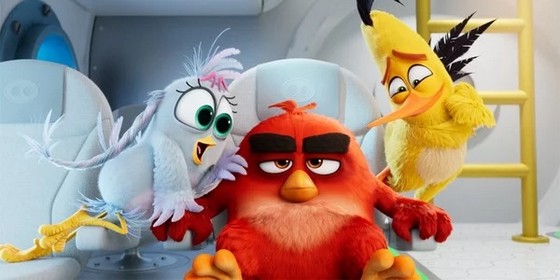 Based on Rovio’s phenomenally successful gaming experience, which has seen over four billion downloads to date, The Angry Birds Movie became a global box-office hit in 2016. In the first film, Red was the angriest of the angry birds – an always-aggravated outcast on the otherwise tranquil Bird Island. But Red was the only one with the courage to discover and take on the threat of a team of pigs, led by Leonard, determined to steal the birds’ precious eggs. Red, aided by his best pals, Chuck, a quick-witted and fleet-footed canary with the need for speed, and Bomb , a sweet but occasionally explosive guy, led the birds to victory.

Now, in this new adventure, Red is a hero beloved by all on Bird Island. Meanwhile, the bird-pig conflict has devolved into a war of pranks. That all changes when gigantic ice balls begin falling from the sky, onto both Bird Island and Piggy Island.

Colourful, humorous and fun, The Angry Birds Movie 2 ticks many of the right boxes. Nor will its “teamwork over self” message be lost on anyone. I really like the characters that are well drawn – in more ways than one – and the animation is delightful. I am also a particular fan of the evil tyrant Zeta, as voiced by Jones, who seems to have a lot of fun with the persona. Another plus is the story arc involving the mega-cute hatchlings. They may be small but they dream big.

Reflecting the animation, even the final credits make good use of coloured Post-it notes. The popular up-tempo music used is also a winner. A sure sign that the movie was hitting its mark is that the three primary school age children seated next to me seemed thoroughly absorbed. I didn’t hear a peep from them.

It’s not necessary to have seen the original before this sequel, but it will certainly bring context to the hero, Red … and the journey he has been on.