Experienced director James Kent (Testament of Youth) brings Rhidian Brook’s well-received novel to the big screen in The Aftermath. And while fans of the book will notice some glaring differences, the film nonetheless goes to some interesting places.

Brook himself headed the scriptwriting team, collaborating with Joe Shrapnel and Anna Waterhouse to beef up the screenplay. Their script results in a carefully textured film that explores a relationship in crisis, while the world around it is in even deeper calamity. And while some of the situations and dialogue come off as a bit arch, the film adopts a very mature approach to its subject-matter. 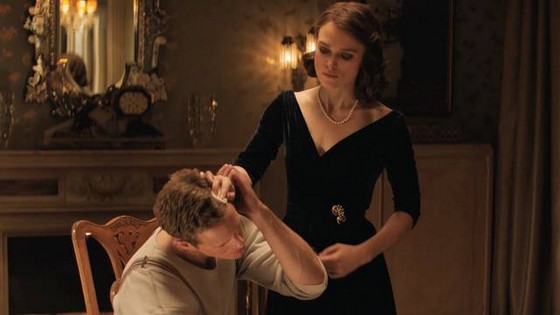 It’s 1945 and the war has been over for a mere 5 months. In devastated Hamburg, British colonel Lewis Morgan (Jason Clarke) oversees the painfully slow rebuilding effort. His wife Rachael (Kiera Knightley) joins him as the chill of winter is setting in. While most of the city is in ruins, the British occupation force has commandeered an untouched manor house in the woods outside the city as Morgan’s quarters. It belongs to Stephen Lubert (Alexander Skarsgård), an architect who lives there with his daughter Freda (Flora Thiemann) and a small household staff. With his house taken, Herr Lubert and Freda are to be shipped off to a refugee camp. But the sympathetic Morgan agrees to let the family stay on – but on the condition they remain upstairs while he and Rachael live in the main part of the house.

Things in Hamburg itself however are rough. Allied bombing has razed the city. The civilian population has little food and no heating. Attacks by so-called “werewolves” – Nazi loyalists who refuse to accept Germany’s defeat – further hamper Morgan’s efforts. Even on his own side, Morgan clashes with security officer Burnham (Martin Compston), who takes his work in “denazification” very seriously indeed. But Morgan and his wife are dealing with a heavy loss, and life among the “enemy” only serves to make it more painful. As Lewis pushes Rachael away in favour of his work, she in turn comes to see something attractive in the equally damaged Lubert.

As with any book adaptation, The Aftermath loses some of the detail from its source material. Here the screenwriters skip over parts of the historical context in favour of the personal relationships. Some parts of the film feel a bit rushed as a result. Some of the changes from the book also result in incongruities in the film, though these are easily overlooked.

The Aftermath is ultimately a film about dealing with loss. I liked that just when I thought I knew where it was going, it changed tack and went in a different, less conventional, direction. Kent directs in a straightforward style, which tends to befit the austere circumstances.  The plot bogs down in a couple of spots, but Kent builds the drama towards the end. Without really knowing, Bojana Nikitovic’s costumes and Sonja Klaus’s production design seem authentic to the period.

Kiera Knightley (Colette) holds the film together as the conflicted Rachael, though she’s hampered by some stodgy dialogue. Versatile Australian actor Jason Clarke (First Man) gives what I thought was a really excellent performance as Lewis. Alexander Skarsgård (War on Everyone) is unusually subdued as Lubert, but he suits the role perfectly.

I ended up liking The Aftermath a lot more than I was expecting. It’s compelling story and slightly unconventional approach make up for a lot of flaws. It’s worth a look if you’re seeking an intelligent grown-up film.