After several decades, with the release of the animated film The Addams Family, I can finally come clean. I had a crush on Carolyn Jones who played Morticia Addams in the original live action television series (1964-66). I also thought Christina Ricci was well cast as Morticia’s daughter, Wednesday, in the subsequent cinematic adaptations (The Addams Family [1991] and Addams Family Values [1993]). This cartoon version remains true to the original charm of a creepy, kooky, mysterious and spooky family that appreciates the ghoulish and hideous. 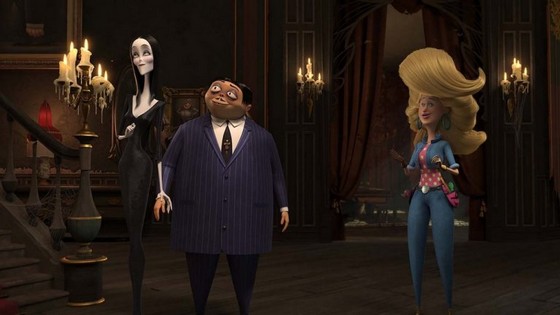 In this case the story involves Morticia (the voice of Charlize Theron) looking for a safe place to live that the family can call its own. That is after they are set upon by townsfolk as she and Gomez (Oscar Isaac) are renewing their vows. They find what they are looking for in an abandoned haunted mansion in New Jersey (a nod to The Addams Family creator Charles Addams’ home state) that used to house those deemed insane. It is where Lurch (Conrad Vernon) – who they recruit as their butler – was an in-patient and from where he escaped.

Cut to 13 years later. Morticia and Gomez remain deeply in love. Pugsley (Finn Wolfhard) is shortly to face a rite of passage ceremony known as the “Sabre Mazurka”, involving much sword play, but he is hardly enthusiastic, preferring to blow stuff up every opportunity he gets. Wednesday, on the other hand, is perpetually bored. Suddenly, life for the Addamses changes when the thick fog surrounding their dilapidated mansion lifts. They find themselves close to what purports to be the perfect manufactured community of Assimilation.

They are targeted by a ruthless television reality show host, Margaux Needler (Allison Janney). Wednesday (Chloë Grace Moretz) goes to school – which she hasn’t done before – and makes a friend, namely Needler’s daughter Parker (Elsie Fisher). And the extended Addams family will get together for the first time in more than a decade to watch Pugsley’s initiation to manhood. Naturally, all goes pear shaped.

I appreciated the references to the Addams’ origins and the humour associated with that, but I am not convinced there is enough here to satisfy children. There is much more for adults familiar with past iterations of The Addams Family. I enjoyed many of the smart one-liners. Thing has a prominent role, as does Lurch who has a wide organ playing repertoire. The music is ear pleasing.

The star of the piece for me was Wednesday Addams, with Moretz’s droll voice characterisation making it so. She makes her mark early and has a significant part to play throughout. There is also time for fun to be had with Uncle Fester (Nick Kroll), Grandma (Bette Midler) and It (Snoop Dogg). The Addams Family also features the voice talents of Martin Short and Catherine O’Hara as Grandpa and Grandma Frump.

The filmmakers have jammed a lot into the 90 minutes and to appreciate it all I will just have to take a second look. Suffice to say, I enjoyed and appreciated what I saw. With a screenplay by Matt Lieberman (Playing with Fire) and direction from Greg Tiernan and Conrad Vernon – who also co-directed Sausage Party – The Addams Family legacy lives on in this reboot.