Tea with the Dames provides a fly-on-the-wall look at four grand dames of British theatre. This quartet have been friends for ages. They get together periodically and now, for the first time, they have let the cameras record their interplay. At the same time, we take a look back at their careers through clips of their films and theatrical performances. 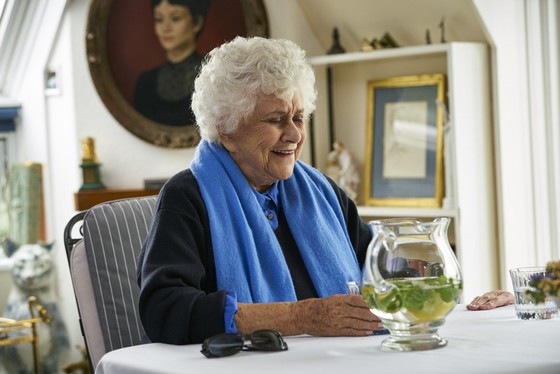 The filmmakers have unearthed a treasure trove of archival material. And, most importantly, director Roger Michell (Notting Hill) asks them several pointed questions. I’ve kept you in suspense long enough. The four I am talking about are: Judi Dench, Maggie Smith, Joan Plowright and Eileen Atkins. Together they are now aged 342!

We look at them as they were when they were bright young things and, of course, as they are today. They’ve gone from fledgling actresses in the 1950s to acting royalty. They’ve watched each other’s careers grow and blossom, and have celebrated life’s ups and downs together.

They talk about their fears, and about working with the crème de la crème of acting talent; including their respective husbands. They discuss their feelings when knighted and what they would say to their younger selves in they could give them advice. All of them speak so eloquently.

You could call this a love letter to the finest of British talent. They come off as real people who have made acting their life’s calling. The dames are candid, caustic, competitive, humorous, irreverent and poignant. Michell wanted these women to say and do what came naturally to them, so we eavesdrop on their conversations without rehearsal.

They’re not short of a word, but are also extremely respectful of one another. Michell gives the even-handed treatment. Each has their time to shine, to be the centerpiece of the camera’s glare. And to give Tea With The Dames a “real” feel, Michell has ensured stagehands and camera operators are also injected into proceedings at various junctures.

I felt it was perhaps a tad long at 83 minutes, but nonetheless it was authentic – the closest we are ever going to get to these celebrated women “unplugged”.