In Swimming with Men, Rob Brydon stars as Eric Scott. Eric’s a middle-aged accountant suffering a mid-life crisis, who finds new meaning by joining an amateur men’s synchronised swimming team. His wife, Heather (Jane Horrocks), has just been elected as a local councillor and can’t understand why her husband is becoming increasing distant. 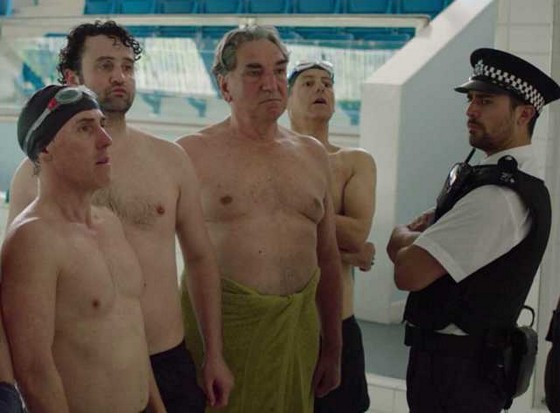 The film opens with Eric, a regular swimmer, offering some advice to a group of blokes struggling to nail a routine in the water. They’re a rag-tag bunch – each with their own issues – who come together as a synchronised swimming team. Next thing you know, Eric is invited to join them and – surprise, surprise – he finds the experience puts a new spring in his step.

In 2010, award-winning documentary Men Who Swim made quite a splash (pun fully intended). That film followed a group of Swedish synchronised swimmers as they found unlikely success at the unofficial All-Male World Championship in Milan. It waded into situations of great humour and poignancy. Once they finished the documentary, the producers started to think of it as a narrative film as well.

They moved the locale to London and turned it into a tale about a guy having a meltdown, who finds refuge in a team. At this point, I should say that the real-life synchronised swimmers featured in the doco play the Swedish team in the film’s championship final.

I wish I could say this pedigree makes for a memorable movie, but I can’t. It serves up platitudes and predictable pap that takes a well-worn leaf out of scripts like The Full Monty and Calendar Girls. At least when they came along, they had a sense of freshness. Well-choreographed routines, set pieces and twee one liners can’t hide a thin plot.

All eight men in the team have been manufactured with issues. And, of course, the narrative has to play through these and deal with tensions, both inside and outside the group. Gee, isn’t that a turn up? I am afraid cute alone just doesn’t cut it. If Rob Brydon’s character could have been any more boring, I reckon he’d be dead.

Still, if you are of a certain age and don’t go to the movies a lot, Swimming with Men could be for you. It’s been done strictly by the numbers. Time to clean out my sock drawer because there is more satisfaction to be had there.