With music by Cy Coleman, lyrics by Dorothy Fields, book by Neil Simon and choreography from Bob Fosse, Sweet Charity is understandably one of the greatest of Broadway musicals. Yet, far from being a big, razzmatazz affair, it is essentially a simple and tender story, which makes it an ideal fit for Brisbane Powerhouse’s intimate Visy Theatre. Actually, perfection is also a far-from-hyperbolic descriptor of the show by Understudy Productions, the little Brisbane theatre company that has very quickly become a very big deal.

Charity Hope Valentine (Naomi Price) is a girl who dreams of being loved, despite the continuous misfortune of relationships handed to her by ‘the fickle finger of fate’. One day after work as a dance hall hostess at New York’s Fandango club, she, by chance, meets the film star idol Vittoria Vidal (Andy Cook) and is bewitched by his charm and riches, until his lover Ursula (Lizzie Moore) returns into his world. With hope that her life is changing for the better, Charity seeks out some cultural enlightenment, however, gets stuck in a broken elevator with shy, claustrophobic tax accountant Oscar Lindquist (Stephen Hirst). Romance is sparked, despite her worry that he will not approve of her career choices and she lives… hopefully … ever after. 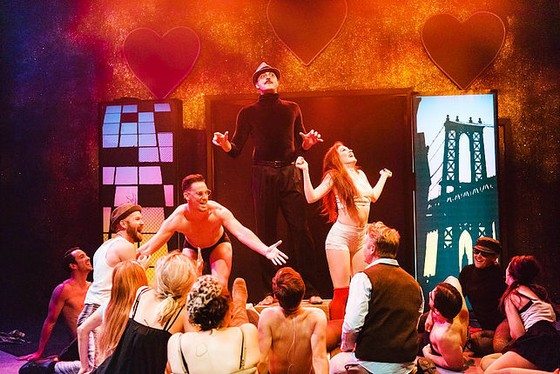 Often I find myself judging a show by how long in it is before I find myself glancing at the time. With Sweet Charity, however, I found myself so caught up in its all-round entertainment that the only distraction of which I was aware was the face-ache caused by the smile and laughter that it induced. Unlike many perhaps, I knew little of the musical beyond recognition of its big-ticket number “Big Spender”. Rather than being performed by Charity herself, however, this is a sensual ensemble number by her fellow hostess dancers in proposition of the audience. Instead, her turn with a familiar tune comes courtesy of the energetic “If My Friends Could See Me Now”, in which she reflects on her marvellous luck as she spends time with Vittorio. The scene that finds her hidden away in a closet of his luxury apartment while he reconciles with his glamorous girlfriend is a hilarious showcase of Price’s impeccable comic timing, exact exaggerated facial expressions and spot-on awkward movement.

The role of Charity Hope Valentine appears as if was written for Price and in conjunction with its comedy, she easily conveys the character’s enduring innocence and irrepressible optimism with a warmth that makes her immediately endearing to the audience. She also plays the poignancy of its final, vulnerable scenes with emotional sincerity. Price is vocally versatile too and always on-point, whether in the introspective reflection of “Where Am I Going?” or the lively elation of “I’m a Brass Band”. And by the standing ovations offered, it appears that I am not alone in thinking so.

Opening night was a sold-out show and I imagine the season will shortly follow suit. Things are busy on stage also, thanks to the production’s large cast, however, the stage never feels overcrowded, even in the ensemble numbers, in which movement generally appears effortless. Clever choreography (Dan Venz) provides an added element to the entertainment with nod to its era and also the precise and provocative Fosse style of snaps, swivels, thrusts and glamourous gestures, but also a modern touch. The brilliant “Rich Man’s Frug” dance routine is a Fosse and Fellini (the musical is based on the Italian director’s film Nights of Cabiria) infused imagining that is worth the price of admission alone. It also highlights the vibrant musical arrangements (Musical Director Shanon D Whitelock) that characterise the production’s slick realisation of the musical’s jazzy score and swing from song to song. And it is difficult not to be enticed when the ensemble moves into the audience such as in Act Two’s knockout gospel-like number, “Rhythm of Life”, in which Charity and Oscar spend a date at a church run by a group of hippies. Although the number doesn’t have any real connection to the central story, its comprehensive scale and slick execution mean that this hardly matters.

The success of Understudy Productions’ Sweet Charity is that it simultaneously works on every level and in every way, however, it could not succeed without a strong personality in the lead role which demands someone who can act, sing and dance in equal measure. And in this regard, the company could hardly have made a better choice than Naomi Price. While she sparkles, however, it is not at expense of the strong supporting cast. The main players, especially, all convey a strong stage presence. Andy Cook is deliciously over-the-top as lothario movie star Vittorio, especially when his mannerisms are even more heightened in interaction with demanding girlfriend Ursula (an appropriately melodramatic Lizzie Moore, who also impresses as Charity’s frank and streetwise colleague and friend Nickie). In a contrast to his recent roles, Stephen Hirst plays Oscar with warmth and sweetness that makes you genuinely want things to work out for them, right from their beautifully played first meeting. And Elliot Baker is magnetic as the mysterious Daddy Brubeck, cool and funky guru leader of the Rhythm for Life Church.

Like the character of Charity herself (I’m not sure if I want to be her or be friends with her), this production is utterly charming. By focusing on Charity’s optimistic and hopeful nature, co-directors Kris Stewart and Maureen Bowra have crafted an appealing story of a confident, quirky and determined young woman. Like her, the show doesn’t take itself too seriously which is the essence of its joy, with both hilarious situations and little unexpected comic touches that only make its experience more endearing. Indeed, the effervescent production bursts onto the stage with a vitality and contemporary energy and perspective that means that the now dated pre-feminist text can still entertain as escapism.