Talk about high-concept. An unlikely pair of Swedes try to make a go of it as semi-skilled (but totally unlicensed) private detectives in Stan’s Swedish Dicks. The outcome is a kind of Get Shorty meets Scandi-crime. 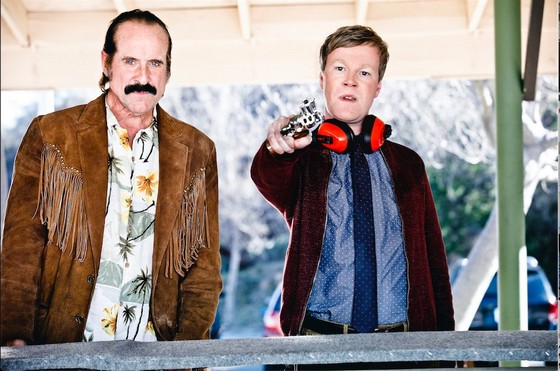 It’s fair to say this Swedish-US collaboration doesn’t aim very high. The producers aren’t looking to make another Fargo here. Swedish Dicks plays it mostly for laughs – in that understated way the Swedes seem to enjoy. That said, there are a few more obvious noir elements here to keep crime fans coming back.

In the pilot, hard-bitten Ingmar (Peter Stormare) is hired by fellow Swede Axel (Johan Glans) to recover a stolen laptop. Axel is an aspiring – though not very successful – DJ. Axel has stored his “best” tracks on the computer, and he’s worried they’ve been stolen by a rival. A confrontation with a another DJ and a gangster sees the laptop safely recovered. And the two countrymen decide to go into business together.

The ensuing episodes cover a variety of cases. None of them are particularly high-stakes (cheating spouses, stolen cars, that sort of thing) but they deepen the bond between Ingmar and Axel. They also provide an opportunity to explore their backstories more deeply. One of the more interesting characters is Ingmar’s daughter Sarah (Felisha Cooper), a lawyer who spends a deal of her time getting her dad out of trouble. Keanu Reeves also has a recurring guest role as Ingmar’s friend and sometime collaborator, Tex.

You couldn’t say Swedish Dicks has exactly slick production values. Much of the action takes place in grimy locations like carparks, or in Ingmar’s ramshackle office. This however fits in with the noir-lite feel. Ingmar’s wardrobe is in the same vein – a collection of Hawaiian shirts (mis)matched with a fringed suede jacket.

Stormare – best known from his Coen brothers films, including The Big Lebowski – brings a rugged if dishevilled charm to the lead role of Ingmar. This provides a nice contrast to Johan Glans’ naive peppiness as Axel. Vivian Bang adds to the series’ quirkiness as the firm’s dour receptionist Sun.

While it’s not exactly must-see television, Swedish Dicks is at least an entertaining diversion. Its quirk and charm are big pluses, as is its low-key humour. So if you’re sick of formulaic police procedurals but still want a dose of crime, this might be one for you. Swedish Dicks is now streaming on Stan.