As the director of delicate human dramas like Call Me by Your Name, Luca Guadagnino probably wasn’t the obvious choice to direct a remake of Dario Argento’s blood-spattered cult favourite, Suspiria (1977). But that’s exactly what he’s done and the results are impressive.

Guadagnino hasn’t gone for a straight remake. This is a marked departure from the original and includes elements from Argento’s two sequels to his Suspiria – Inferno (1980) and Mother of Tears (2007). It also explores some of Argento’s deeper themes, including the notion that evil hides in plain sight. 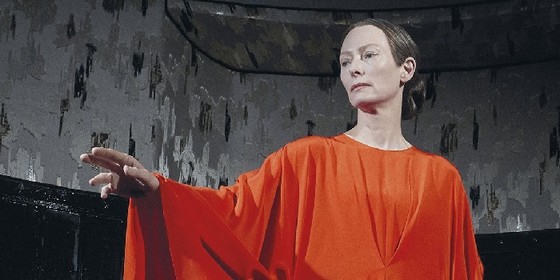 The setting remains Berlin. The time is (probably) 1977. Susie Bannion (Dakota Johnson) arrives in the city determined to win a spot at the Markos Dance Academy. At the grim Academy building next to the Berlin Wall, she’s given an audition. Much to the instructors’ surprise, she’s excellent. They summon the director, the world-famous Madame Blanc (Tilda Swinton). She’s sympathetic to young Susie, and as luck would have it, a spot (and a rent-free room above the studio) has just opened up. That’s because dancer Patricia (Chloe Grace Moretz) has mysteriously disappeared. Susie befriends Sara (Mia Goth) and soon finds herself on the fast track to being a principal dancer. But the other dancers whisper about strange goings-on at the Markos Academy. Those whispers turn into screams when terrible dreams invade Susie’s sleep.

This is a dense, at times troubling film. It’s not light fare at all. Guadagnino eschews Argento’s bright colour palette for washed-out greys, adding a grim touch. He and screenwriter David Kajganich also introduce a new sub-plot involving a psychiatrist struggling with a dark past, bringing an element of historical guilt into the film. Guadagnino and Kajganich bring a feminist reading to the original’s witch narrative. As such, this Suspiria resembles a Fassbinder* film far more than Argento’s patented giallo horror.

That said, Guadagnino does lean into some of Argento’s stylistic elements. Several of the images and techniques clearly reference the original. And in the climactic sequence, Guadagnino drops all pretense of restraint and just goes for it in a gloriously gory homage to the original.

Suspiria allows Guadagnino gets to spread his filmmaking wings. He introduces a stack of visual metaphors, some easier to pick than others. His handling of the film’s pivotal dance sequence is exquisite. The grotesqueness is played up as the gore is played down – at least until that bloody final scene. Thom Yorke (from Radiohead) complements the action with a jangly understated score. Oh, there’s a little post-credits teaser, so stick around for that.

I’d never really warmed to Dakota Johnson (the Fifty Shades films) as an actor, but she impresses here as the contradictory Susie. She brings an energy to this performance that I don’t think I’ve seen from her before. Mia Goth (Everest) provides able support as the rather naive Sara. Veteran French actor Sylvie Testud (Final Portrait) has a small role as one of the instructors, as does Jessica Harper, who played Suzy in the 1977 Suspiria (a nice touch). But Tilda Swinton (The Grand Budapest Hotel) towers over all of them as the haughty but enigmatic Madame Blanc.

Guadagnino’s Suspiria is far more psychological drama than it is horror. But fans of the cult classic should still find plenty to like here. This version demands a lot more from its audience, but I think it’s the better for it.

*Rainer Werner that is, not Michael