Does it seem to you also that 2020 is the year in which we’re all finding out that many of our long time favourite shows are winding up?  Here’s another. Season 14 is the second last season ever of Supernatural, so get your hooks in now to enjoy all the schlocky horror before Season 15 brings all the fun to its no doubt apocalyptic end. 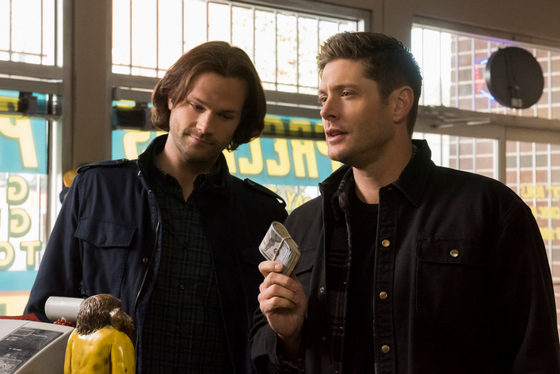 Sammy and Dean Winchester still have miles to go before they rest and in S14, the no-good angels are up to their usual dirty body possessing tricks.  The archangel Michael, happily using Dean (the immortal Jensen Ackles) as a well dressed and handsome meatsuit, is now super powered up via the stolen grace of Jack (Alexander Calvert).  It’s rather exhilarating for the archangel to roam the earth in a mortal form, and it isn’t long before Michael is making evil alliances with creatures such as the vampires in order to increase his powerbase.

Jack, the Nephilim son of Lucifer, must learn how to cope in his mortal body without his grace, which sets up some challenges necessitating the reappearance of Rowena (the delightfully sarcastic Ruth Connell), who must dive repeatedly into the Book of the Dead in order to conjure up solutions, however temporary, for some very tricky hunter problems.

Sam (Jared Padalecki) is now responsible for all the hunters brought over from Michael’s former world, so there is a whole new group of monster savvy people that the versatile Sam must now coordinate and train in the ways of monster hunters.

Created by Eric Kripke,  the dark and often comedic paranormal series that is Supernatural first aired in 2005 and has powered on through the years, exceeding the expectations of everyone concerned it would seem.  Supported by the show’s particularly devoted fan base, the two lead actors of Supernatural have more or less grown up in front of our eyes and the chemistry between the two on screen brothers has always been the focal point of the series.

Series 14 of Supernatural ventures into even darker places with the inclusion of some unprecedentedly gorey butchering carried gleefully out by Lucifer/Nick (Mark Pellegrino). These wince worthy inclusions seem rather gratuitous, even in a horror series such as this, as these upscaled murders and torture sessions are carried out on humans and not ‘monsters’.  The introduction of more diverse ancillary characters is welcomed, and many of our series favourites (hello Jeffery Dean Morgan) also pop up here and there to remind us of the show’s original storyline.

Season 14 of Supernatural is now able to streamed in its entirety on Amazon Prime.   Carry on our wayward sons… until the final season.