Stuber is another variant on the buddy-cop formula that was popular in the 80s and 90s. However, films like Lethal Weapon, Midnight Run and 48 Hours did this sort of thing much better.

It’s LA’s hottest day since 1911. Vic Manning (played by former wrestler Dave Bautista) is a tough and perennially angry LA cop who is obsessed with trying to bring down Teijo (Iko Uwais), a vicious drug dealer who killed his partner six months earlier during a shootout outside the Staples Center. Vic is also estranged from his artist daughter Nicole (Natalie Morales), who is about to have an opening of her sculptures at a gallery. Vic has just undergone laser eye surgery to correct his failing vision when he receives a telephone call confirming that Teijo is back in town and a big drug deal is planned. 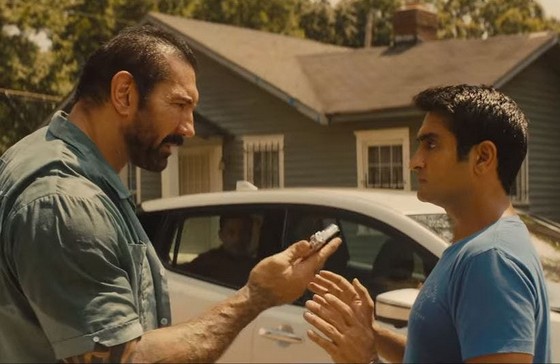 Unable to drive, Vic commandeers an Uber ride with the timid Stu (Kumail Nanjiani). Stu works as a salesman in a sporting goods store by day and drives his hybrid Uber part time. He’s a bit of a wimp, especially when it comes to his relationship with possible romantic partner Becca (Beth Gilpin), and his clueless manager Ritchie (Jimmy Tatro). Stu’s fastidious and polite; anxious to maintain his five-star rating. The pair bicker and argue while in hot pursuit of Teijo, dodging bullets during as couple of shootouts. But they also slowly begin to bond as Vic helps Stu find his tougher, masculine side and assert himself, while Stu addresses Vic’s emotional illiteracy regarding his relationship with his daughter.

Writer Tripper Clancy (Hot Dog) obviously knows the tropes of the genre, and his derivative script has clearly been influenced by those classic 80s action-comedies. The director is Michael Dowse (Goon) who seems comfortable with the juxtaposition between humour and action. He maintains a frenetic pace throughout. The film delivers plenty of action with some carefully choreographed carnage and fast paced car chases, but the violence seems a little too graphic for a comedy.

Bautista (Guardians of the Galaxy) and Nanjiani (The Big Sick) create a prickly odd-couple dynamic here. Their contrasting physical appearance also provides laughs. Much of the dialogue between the pair seems improvised as they trade barbs. Bautista seems to revel in the physical comedy here, and his no-prisoners approach works. Nanjiani’s deadpan approach to his neurotic character adds humour to the material and he gets some of the film’s best lines. Uwais (The Raid), who also doubled as fight choreographer, handles the martial arts action effectively with a couple of breathtaking fight sequences. The supporting cast includes Mia Sorvino as Vic’s police captain and Bautista’s GOTG co-star Karen Gillan as Vic’s partner Sara.

Stuber offers a comedic riff on the plot of Collateral, in which Tom Cruise’s hitman hires a cab to drive him around to his targets. Stu may offer a five star ride, but the film itself only offers a three star experience at the cinema.