What would you do if the impossible was real? Director Rowan Athale wants you to contemplate that big question in his new thriller Strange But True. Unfortunately his big question gets lost in a muddled script that strains credibility. 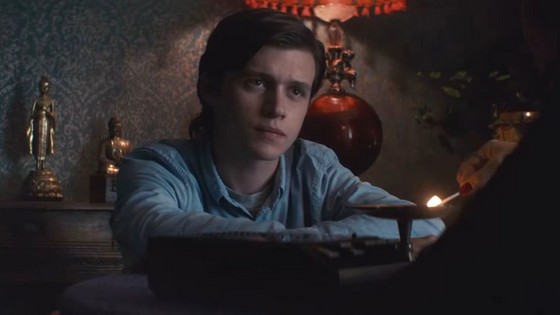 Eric Garcia has adapted John Searles’ novel of the same name for the screen. It seems Searles can count Gillian Flynn (author of Gone Girl) as a fan, and there’s more than a whiff of Flynn’s signature style in this film. But Searles and Garcia push things too far, making it difficult to suspend disbelief.

Philip (Nick Robinson) is laid up on crutches. He’s staying with his abrasive mother Charlene (Amy Ryan) in upstate New York while his broken leg heals. Things are obviously tense between them. And obviously that has a lot to do with the fact Philip’s brother Ronnie (Connor Jessup) is dead. But Charlene and Philip are thrown into disarray when Melissa (Margaret Qualley) turns up on their doorstep. Melissa was Ronnie’s girlfriend, and Charlene apparently still harbours a grudge. But it gets worse. Not only is Melissa heavily pregnant; but she claims the baby is Ronnie’s, since he’s the only boy she’s ever been intimate with. Thing is though, Ronnie died five years ago.

Kindly older couple Gail (Blythe Danner) and Bill (Brian Cox) support Melissa by letting her live in a cottage on their property. But with no father on the scene, Melissa understandably worries about her baby’s future. Meanwhile, Philip’s dad Richard (Greg Kinnear) has moved to Florida with his new (younger) wife; which riles Charlene enormously. For her part, Charlene simultaneously thinks Melissa is nuts, but desperately wants to believe a part of Ronnie has survived.

Garcia and Athale weave multiple threads of the story, which keeps things bubbling along. The problem though is that the big twist (yeah, there’s always a big twist) is jarring. It relies on one character acting completely contrary to everything the movie has laid out beforehand. The movie gives no hints to this huge change; and the (verbal) explanation given after the fact is weak.

A similar thing infects some of the other characters, who act in ways that just don’t gel.

The all-star cast is excellent though. Nick Robinson (Love, Simon) steps up as protagonist Philip. Amy Ryan (Late Night) is at her biting best as Charlene; while veterans Blythe Danner and Brian Cox add layers as the older couple. Margaret Qualley (Once Upon a Time… in Hollywood) is good but under-utilised as Melissa.

Strange But True tries hard to live up to its name; but it ends up being neither strange enough or “true” enough to pull it off.