A loved-up couple, but not everything is right in the intense relationship between Kali (Amy Bradney-George) and Todd (Seton Pollock). The elephant in the room is fear, jealousy and distrust. She has a mighty big chip on her shoulders. When things are good, they are very good, when they are bad, they are horrible. How can a union that is supposedly so strong be so toxic? That concept is explored in British dramatist Bryony Lavery’s Stockholm.

The title is drawn from the fact that the pair is about to embark on a holiday together to the Swedish capital, but first they are celebrating his birthday with a romantic night in. I dare say it is also a reference to Stockholm Syndrome, which describes hostages developing a psychological alliance with their captors.

In this case, what starts out with much promise is derailed more than once. A letter from his mother, a call from his parents, a call on his phone from a woman she doesn’t recognise and a forced game recalling a favourite meal before they got together are just some of the speed bumps.

As well as being textually dense – on occasions too much so – Stockholm is also a very tactile work. The pair is all over each other, whether loving or scrapping. Fight choreography is by Joshua Bell. Mind you, they also dance around each other (and, it must be said, with each other). Choreography and movement direction are by Shamita Sivabalan.

Todd knows how to press Kali’s buttons without even trying and, as desperate as he is to avoid that, she can’t help herself. There’s a sequence close to the end that makes you question just what will happen to this couple years from now. Is it a nightmare or a description of what’s to come? You be the judge … for it is open to interpretation. Let me just say that I am not at all convinced this is a relationship destined to last.

I liked the exploration of a twosome that at first glance seemed like a match made in heaven. The close proximity the audience has to the “combatants” puts us in the thick of the action. Solid performances from Bradney-George and Pollock do the material justice. 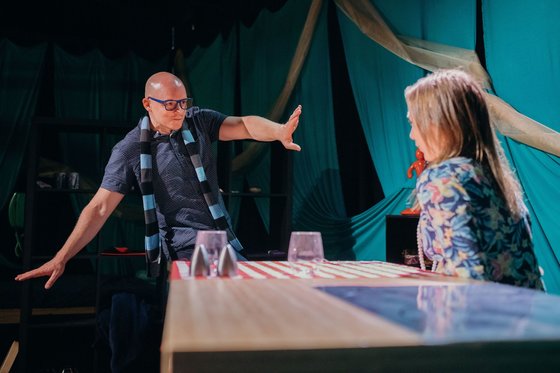 The piece was originally staged in 2007 by a UK company named Frantic Assembly. It was inspired by an incident that happened in a shared house where the company’s artistic director lived. His housemate’s boyfriend turned up with a face like thunder and immediately went up to her room with her. They began arguing. The argument escalated with an open door. Shouts became crashes.

In his director’s note for this Et Tu Theatre production, Carl Whiteside says the challenge was to find why Todd and Kali stay. “Why doesn’t one of them end it? Do they actually want to end it?” Bradney-George and Pollock have done a good job treading that fine line and making us think about what is and what should be. Seventy-five minutes without interval, Stockholm is playing at The MC Showroom until 7th December, 2019.