Gritty realism at its ugly best. That’s Ken Loach’s latest working class, slice of life film. As painful as it is to watch the struggles of the family at the centre of it, it is another beauty. It is a story about decent folk who get a bad deal in life, which keeps on delivering. 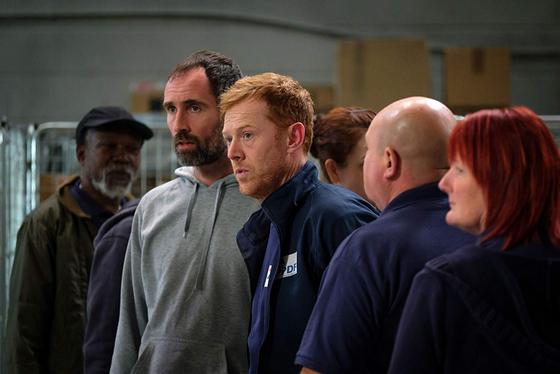 You can’t but help feel for what they are going through. While there is a strong bond between them, they are struggling.

Father Ricky Turner (Kris Hitchen) has held a number of jobs but is looking forward to working for himself as a parcel delivery driver, contracting to a large company.  But first he has to find a not inconsiderable sum to buy a van. That entails selling the car his wife Abby (Debbie Honeywood) uses for her job caring for a series of elderly and infirm patients. Caring and compassionate, henceforth she will do so by catching the bus.

He is immediately beholden to the firm, working 14-hour days, with constant deadlines to meet. Any days he wants off he needs to find a replacement driver, otherwise he will be fined. His boss is a particularly hard arsed individual who isn’t willing to accept any personal excuses. He is proud of the fact that his depot is the standout in the business’ operations.

The couple has two children – Seb (Rhys Stone), a 16-year-old who is acting up, skipping school and going tagging with his mates instead and Lisa Jane (Katie Proctor), a sensitive, whip smart 11-year-old. Suddenly, despite the tireless efforts of both husband and wife they and the family unit are under more pressure than ever. Their lives are imploding before our very eyes and we are powerless to do anything to help.

I say that because we build an affinity for the players and their plight. That’s in large part due to Loach’s direction, but first and foremost the penmanship of his usual collaborator, screenwriter Paul Laverty. That is to take nothing away from the intrinsic value in the performances. Hitchen makes a good fist of it as the stoic but struggling father, while there is a fortitude and decency in Honeywood’s role as mother. Proctor shines as the daughter who feels everything and longs for harmony. Stone is – for the most part – aloof and brooding as the wayward son. One of the strongest showings comes from Ross Brewster as the unsympathetic manager Gavin Maloney.

I describe Sorry We Missed You as a “perspective” film insofar as it makes you thankful for what you have and for not having been dealt a similarly stacked deck.  Rated M.