A wicked soundtrack and a bodacious storyline underpin Sorry to Bother You. And this subversive comedy hits many of the right notes. This is the kind of movie you’ll either love or hate. It definitely pushes boundaries. It’s fantasy, but it is also endearing. 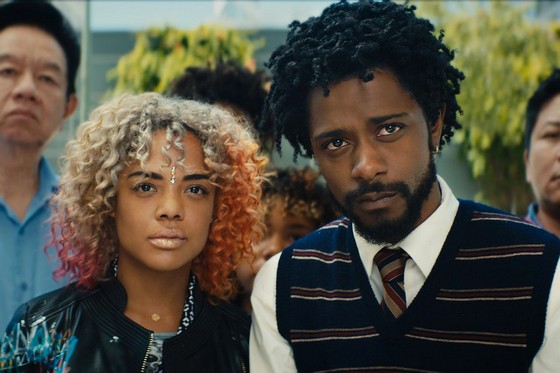 The film follows telemarketer Cassius Green (Lakeith Stanfield) on a journey of self-realisation and discovery. Green is down on his luck and behind on his rent. He shares a cramped room in his uncle’s garage with his performance artist girlfriend Detroit (Tessa Thompson). Finally though his luck may be changing, when he lands a job at a telemarketing firm.

After a quiet start, he discovers the magical key to success in the job. He masters the art of power calling. Before you know it, he’s on his way. Suddenly, life is looking up, or is it? Red flags are raised with Detroit, who’s part of an activist collective rebelling against the oppressive working conditions. Meanwhile, Green has caught the eye of the company’s CEO, Steve Lift (Armie Hammer), who is quite a piece of work.

Sorry to Bother You marks the feature debut of writer/director Boots Riley — founder and front man of hip-hop collective The Coup. All Riley’s views on capitalism are in this movie. He’s commenting on how the system works and how it can change people. He examines how humans are coerced into being more efficient.

A number of sequences stand out, starting with the opening job interview. This sets the scene for what is to follow.

At its heart is the adage that you can’t blame someone for wanting to get ahead. But the question is: “at what price?” If you’re a sell-out then surely what you’ve worked so hard for is no longer worth it.

Stanfield (Get Out) is pleasant in the lead role. Thompson (Thor: Ragnarok) brings attitude and passion to her role. Hers is the performance I most remember. The anti-establishment score fits the piece perfectly. It really gets inside your head.