A cleverly conceived and executed song cycle about the vicissitudes of life, Songs of the Northern River features six talented women who weave 12 graphic melodic tales. Some are harrowing, others amusing. They deal with pain, cruelty, kindness and achievement. Book, music and lyrics are by Alex J. Ridefelt.

First up, a long-term worker has been laid off but without giving it a second thought she sticks to her usual routine. She steps onto a train only to find a selfish and rude male passenger, before there’s a major delay en route. And in that situation, wouldn’t you know it, nature calls. It makes for a bright and amusing start to the program.

Next, a dancer is facing a long road to recovery – which will take courage and discipline – after injuring herself. A young woman requires a machine to survive. She has difficulty breathing, swallowing and thinking. She is tired. She loses herself in books and dreams of being the hero of one of her stories. Then the characters appear.

In recollections of her youth, a woman recalls falling for an exchange student from France … even though her mother told her young romance would never last. After he flew back home the pair kept in touch, but suddenly the calls stopped. Why?

Next, we hear an ode to virtual love … before a girl pines for a guy who unceremoniously dumps her for a new lover. Then three women – devils – sing about taking a chance.

Suddenly, we are read a news report about a search continuing for five missing women, with police suspecting a 19-year-old man is responsible for the crime. We hear from the young man’s protective mother and from the sister of one of the “victims”.

While being topped and tailed with chorus numbers, the storytelling effectively finishes with a woman wanting to have some “me” time, getting away from it all by going camping for the weekend. Her nirvana is broken by a talkative youngster who claims she has lost her friends and now wants to join up with the woman.

As the finale reads, the river has unforeseen twists and turns. In other words, you never know what life is about to throw at you and when. Not being aware of anything about the show before I set foot into the MC Showroom, I thoroughly enjoyed the diverse and evocative vignettes presented.

Generally, the singing voices of Shannen Alyce Quan, Tegan Nowicki, Anne Gasko Olivia Morison, Savannah Lind and Ambrose Steinmetz are strong and melodic. Some of the high notes are rich and rounded. Others felt like more of a stretch. There’s a lot of solo work involved. 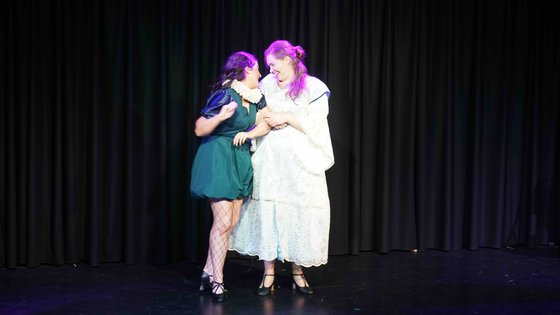 A bit more effort on the basic costuming wouldn’t have gone astray, even if the staging was kept at a minimum (just a couple of crates in the shape of cubes).

One hour without interval, Songs of the Northern River – directed by Jess D’Souza, with musical direction from Rachel Lewindon and choreography by Matthew Dear – moves along at pace. It is on at The MC Showroom in Prahran until 24th November, 2019.