Promiscuity to hide the pain. That – in a nutshell – is the short life and times of Lolita, as evocatively captured by Patricia Cornelius in Slut.

We chart her childhood, mainly through three frenemies (Michaela Bedel, Lauren Mass and Jessica Tanner) – girls who grew up with her, befriended her and then dissed her. They excitedly outline her path, at times breathless with girly anticipation. When she grew breasts the boys were all over her. So, too, a teacher whose attention overstepped the mark. That was only the beginning.

Lolita (Laura Jane Turner) was the first to pluck her eyebrows, shave her legs, pierce her tongue, smoke cigarettes and then a joint, get drunk, grow pubic hair, have oral sex and then intercourse. She was 12 and her partner, Andreas, was in year 12. Although that experience was “nothing much”, the girls detail how Lolita quickly made up for it with her sexual exploits, which became notorious.

While they envied her freedom, the fact that she was never ashamed and had no secrets, by year 9 they had all turned on her. No surprise then that Lolita dropped out of a school and they lost touch. Lolita never had big dreams. She simply wanted one thing, namely to be liked. Only the tale has a tragic conclusion.

Much of the story unfolds through the narrative of the three who grew up with her and for much of their early childhood envied her. Their execution is seamless and with Cornelius’ remarkably vivid prose served to transport me to just how it was at the time, from grade 4 to the bitter end. I was there – a fly on the wall alongside the other girls.

We hear relatively little from Lolita herself. Suffice to say on the surface of it she appears no different to any other youngster who likes the simple things in life. Quite frankly, I wanted more of Lolita’s perspective. I desired to know her side of the story – how she was feeling through the various stages of her development. 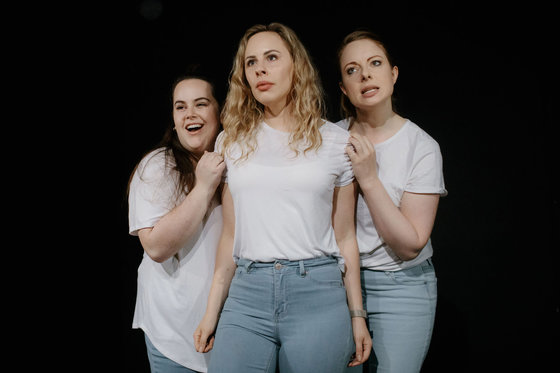 Slut is just as relevant today as when it was first written and performed. It asks questions about support, friendship, misogyny and how labels can degrade self-worth and lead to a rapidly escalating downward spiral. Director Rachel Baring has done an excellent job highlighting a troubling phenomenon of our times through this artistic representation.

With a running time of just half an hour, Slut is an intense experience that is most worthwhile investing in. It is playing at The Burrow in Fitzroy until 21st March, 2020.