I really don’t know why this movie got the title Sleepless, but I guarantee you, you won’t have sleepless nights after watching it. Or it’s out of annoyance, because that’s what this movie did to me. It annoyed me immensely. Not only because of the fact that the subject has been used already infinite number of times, but also because of the ambiguities and ridiculous situations. Apparently it’s a remake of a famous French action film. However, this American version is provided with too much out-of-proportion incidents and exaggerated action scenes. It made the movie totally implausible. 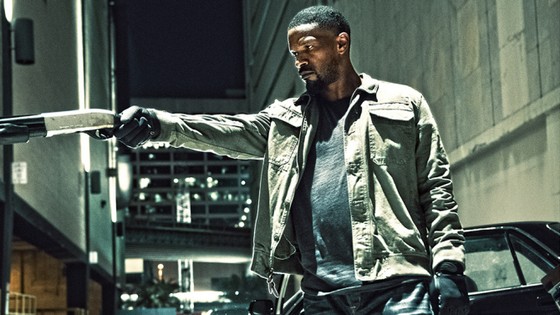 It all starts with a robbery conducted by Vincent Downs (JamieFoxx – Django Unchained) and his partner Sean (T.I.). The loot consists of a huge number of kilos of cocaine. Unfortunately, this cocaine belongs to the illustrious casino owner Rubino (Dermot Mulroney) who promised the drugs to a certain Novak (Scoot McNairy). And trust me, these are folks you don’t want to mess with. Although, in retrospect Rubino isn’t so fearless as you thought he would be. He acts more like a coward and clearly doesn’t know how to handle the situation. And although Novak really looks terrifying (apparently he suffers from sleepless nights, looking at those bags under his eyes) and can fall back on a wide network of connections, the only thing he does, is give orders so others do the dirty job.

Anyway. The next big thing is the abduction of Vincent’s son Thomas (Octavius J. Johnson) during which Vincent gets stabbed with a  knife in the lower abdomen. This causes a lot of blood loss and pain. No wonder that advancing becomes hard for Vincent. But don’t panic. During critical moments, seemingly he forgets about this discomfort (or else he’s carrying a shitload of painkillers he can inject himself with). And let’s not forget about the two clownish persons (they are a kind of Starsky and Hutch) from Internal affairs, who are aware of the fact that Vincent and Sean are playing the “dirty-cop” act after work. And finally, just to ruin Vincent’s day completely, his wife (or future ex-wife) is calling him every 5 minutes, asking him if he found their son already. So you’ll agree when I say Vincent is having a very bad day.

Let’s talk about the positive points first (that won’t take long). Are you a fan of a cool action movies? Well, you’ll appreciate this movie, because the action scenes follow each other at fast-pace. Jamie Foxx’s role isn’t comparable with the one he played in Django Unchained, but yet he was convincing as the hard-hitting agent who tries to save his son’s ass. Novak’s intelligence level isn’t very high, but his psychotic, insane behavior looked terrifying real. Scoot McNairy excelled and played the most successful part in this negligible film.

Well that’s enough positivity. Now let’s see if I can summarize the annoying parts. First of all, the fact that the action scenes look very cliché, isn’t really a problem. But Jamie Foxx experiencing a sort of resurrection after each fistfight, was something that got on my nerves. I’m sure Christ would be jealous of man’s endurance and miraculous healings. After every fight, Foxx needs to go on more dead than alive. But a few minutes later he’s back bright eyed and bushy tailed, so he can face a next opponent.

Next there’s this casino owner who most probably has enough money so he can afford some personal bodyguards, but still seems to be easily intimidated in his own casino. That felt completely ridiculous. And it looked as if Bryant (Michelle Monaghan) was standing the biggest part of the movie at the casino entrance. Watching around with that sheep-like look and realizing the case is hard to fathom. The person who would win the prize for “Most corrupt Agent of the Year”, was a bit too easy to guess. You could see that coming from half a world away. But the most unlikely event is saved for the end. You’ll witness how the most unlikely person takes the most decisive action for closure.

Okay, so the movie doesn’t lack any action. That’s obvious. But content-wise, it’s laughable. Sleepless is an alternative choice for a sleepless night.