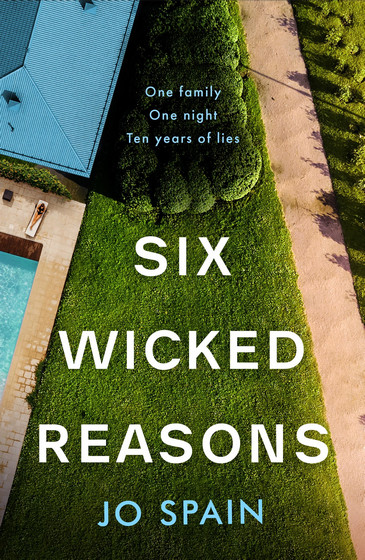 The six adult children of Frazer Lattimer have an entire childhood of fraught experiences to draw upon for examples of bad parenting.  Their mother, Kathleen Lattimer, was an utter saint though and often served as a buffer between her overbearing husband and their three sons and three daughters. With Kathleen now gone, and Adam Lattimer returning home after a ten year absence, there is much that must be discussed.  Six Wicked Reasons is a novel about the people who never let you forget the past. Your family were there, and they know you best.

Adam had quite a few very good reasons of his own to up stakes from Spanish Cove and make his own way in the world. Discovering that his mother passed during his absence is a hard blow to take, and it wasn’t delivered in the best of ways either.  As the news of Adam’s imminent return reaches the Lattimer siblings, the children of Frazer and Kathleen all begin to make their way back to the family home.

It is a huge shock when Frazer announces during the homecoming weekend at that he intends to marry again, and use the proceeds of the house to fund his upcoming world travels with his new bride-to-be, Anna.

There were others in the sphere of the well-at-heel Lattimer family that did not fail to notice that the controlling and narcissistic Frazer was capable of doing great harm to his family. When Frazer falls, or is pushed overboard from the family homecoming party at sea, not everyone in the Lattimer family is in mourning.

The burden of long held secrets that can’t be contained spill forth in an intense and absorbing read that goes the extra mile at establishing credible motives and bedding down the complicated relationship dynamics that lead to murder.  The reader will need to hunker down with the Lattimers, as this is one group of siblings who may not necessarily take the ‘all for one’ approach when their own futures are under threat.

The best whodunits present both a small stage and a small cast of suspects.  The unsettling knowledge that the killer could only be one of a handful of people puts more weight on each of the interactions between suspect/s and victim.  Six Wicked Reasons unravels its dark family secrets via past and present narratives, revealing just enough so that each chapter directs, or misdirects, our attention back to passages just read with a keener eye.

Six Wicked Reasons is a entertaining work of dramatic fiction with murder as the end result of sustained family conflict.

Irish author Jo Spain is a full time writer of both fiction and screenplays whose first novel, The Confession, was a number one best seller.