Siren by Rachel Matthews was sent to me by Transit Lounge and proves uncomfortable reading for its exploration of sexual assault through the eyes of a teenage girl. And yet, despite the discomfort, it’s important reading because it challenges readers to think about a) the necessity of speaking out against sexual violence and b) the extreme difficulties people have when they try to speak out. 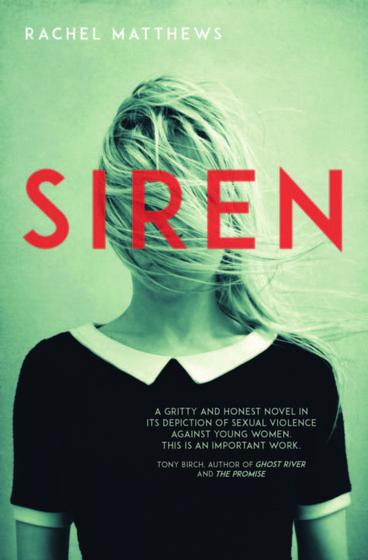 What happens when a young woman enters a city apartment early morning, with two footballers? Jordi Spence is sixteen years old and lives in outer Melbourne. By daybreak, her world has shifted. Max Carlisle, a troubled AFL star, can’t stop what comes next. And Ruby, a single woman from the apartment block, is left with questions when she sees Jordi leave.

In this remarkable novel, Rachel Matthews captures the characters of Jordi and her family, the players, and the often loveable inhabitants of a big city with a deceptive lightness of touch that seduces the reader. Siren reveals the often unnoticed life of a city while simultaneously drawing us deep into a dark and troubling world. What happens has an unexpected effect on all those who are both directly and indirectly involved.

The result is a powerful and haunting novel about cultural stereotypes and expectations, love, loneliness, family and our struggle to connect. In so many ways, Matthews subtly sounds the siren on sexual violence and its prevalence in our culture.

As Matthews shows, it may not only be the victim who feels silenced, but others who are aware of the situation, but find themselves struggling against those who want them silenced and their deep-down feeling that they should speak out.

A well-written and haunting novel that has a subtle rather than moralistic feel. Available here.