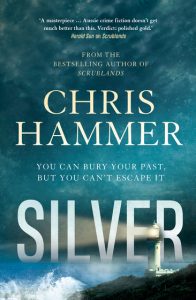 With Scrublands we had the bush, with Silver we have the sea. It will be interesting to see if Hammer’s next book is set in a grotty city capital, just to complete the trifecta of the Australian way of living.

Silver is set in a coastal town that is struggling to stay relevant and facing the need to effect radical changes to be able to keep the local population employed and the tourist dollars coming in.  The small town conundrum of everyone knowing everyone applies, and you are either comfortable with that level of familiarity or you find it hideously oppressive.

Mandalay Blonde (as lovely as her name suggests) has inherited property in the town of Port Silver.  Her new boyfriend, journalist Martin Scarsden was certain he’d never visit the miserable streets of his childhood ever again but there you have it, life sometimes chucks you right back to where you started.  It some ways it is like Martin has never left, and there’s long memories in the community of the tragedy that destroyed the Scarsden family so long ago.

Discovering the body of an old school friend in the house that Mandy has rented for them, Martin’s journalistic instincts take no time at all in kicking back in.  The police seem to like the idea of a newcomer being a murderer, so it’s up to Martin once again to skirt around what’s moral and what’s fine reportage in order to not only save the girl but save the town from itself.

There is a retreat on the edge of the clifftops that attracts the rich and famous to its promise of freedom from conventions, only it seems that a little chemical assistance and political pot boiling may be the tools engaged for the modern age.   Old scores never settled and the floodgates of new grief send the town into a fresh vortex of hasty cover ups, anger and volatile suspicion.

This is richly descriptive writing without the weight of unnecessary words; Hammer has the knack of putting his character’s observations down in such a way that we might find ourselves wondering why no one has ever described something in just that fashion before eg ‘her perfume polite’. Simple, but very effective, and the reader knows instantly and exactly what is being conveyed to them.

Australian author and journalist Chris Hammer writes within a recognizable stylistic era – there’s much posed within Silver that will be screamingly familiar to Australian baby boomers/Gen X’ers. That huge need that Australians have for the water –  even if they’ve never owned a boat and can’t swim a stroke – is captured and collated beautifully in this novel.

With both a laugh and murder in the first few pages, Silver settles the reader in comfortably early.  Hammer writes convincingly of Martin’s upbringing and past regrets, and despite being that old fantastical trope of a middle aged guy having a knock out younger blonde as his girlfriend (sigh), Martin seems like the kind of knockabout bloke who would always muck in and be in the middle of whatever is going on.

As with its predecessor, it could be said that Silver would not have been harmed by the removal of say fifty or more pages – it’s another door stopper.   Also, perhaps a more critical eye passed over Martin pushing his way into crises, as these passages stretch the credibility and can cause the reader to veer away from the page for some momentary eyeroll.   Second novel curiosity should be more than enough to lead the reader to Silver, with Scrublands having been such a well-received book club favourite in 2018.  Silver is also a very good yarn, populated with right bastards, local politics, old loves never forgotten and the glimmer of redemptive promise somewhere out on the horizon.

Containing all that is required for an enjoyable character driven crime read that taps into key aspects of the Australian experience, Silver is an easy choice for the crime fiction fan to pick up next and lose themselves in this coastal summer.