The latest from Finnish auteur Aki Karismaki, The Other Side of Hope was the opening night film at the 2017 Scandinavian Film Festival. This comedy is full of his usual droll humour, deadpan style and absurdist touches. Karismaki often pokes fun at the Finnish working class and their daily struggles. 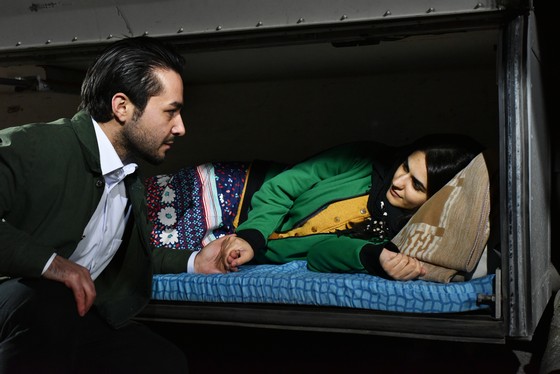 The Other Side of Hope is the second film in an unofficial trilogy exploring the plight of illegal immigrant and refugees in contemporary Europe, and it follows on from 2011’s wonderful Le Havre, in which an aging shoe-shine man took pity on a young African refugee.

Here we meet Syrian asylum seeker Khaled (Sherwan Haji) as he attempts to find a new life in Helsinki. Grumpy Wilkstrom (Sakari Kuosmanen), a former travelling salesman, won at poker and bought a run-down restaurant called The Golden Pint. He decides to give Khaled a chance. This essentially a culture-clash comedy that explores the unlikely friendship that develops between these two men from vastly different backgrounds. The restaurant’s quirky staff bring touches of idiosyncratic humour to the material. Khaled meanwhile tries to reconnect with his sister. The pair were separated at the Turkish border.

The film deals with the topical issue of immigration; and with the violence and racism refugess often suffer at the hands of fascist groups. While this is sometimes grim stuff, Karismaki brings a sympathetic approach to the material. He tinges the film with a sense of hope and optimism. Karismaki’s regular cinematographer, Timo Salimanen, uses a depressing palette of blues and greys to give us a rather bleak picture of Helsinki.

However, there is an upbeat soundtrack that accompanies the film which tempers the mood somewhat. Karismaki’s films are something of an acquired taste. His dry humour, his long static takes and leisurely pacing take some getting used to. But audiences attuned to his sensibility will find much to enjoy here.