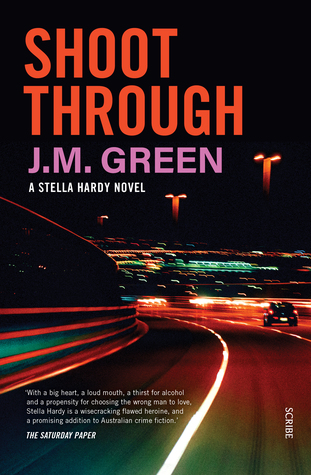 I’ve been a big fan of the Stella Hardy series (Good Money, Too Easy and now Shoot Through), and I will admit that the setting of this one appealed enormously – what with Stella returning to the family farm in the Wimmera (there’s something going on with lots of books being set in that part of the world), and the prison farm which I could have sworn was in South Australia but seemed a lot more like one not a million miles away from where I grew up… but I digress. The attraction of this series has always been the central character. Stella Hardy is a wisecracking social worker, one of the good people in the world, susceptible to a bit of temptation along the way, but reasonably so, what with the suitcase of drug money under her bed and all.

In Shoot Through there’s a complicated plot involving her jailbird brother, his pregnant girlfriend, the family farm, mismanagement and corruption in the prison system, a new boss at the agency where Stella works, that suitcase of drug money, a ever closer circling police force investigation into that, and problems with her relationship with artist boyfriend, Brophy. Pretty much par for the course when it comes to Stella’s hectic and slightly frenetic lifestyle. Although this time out there’s less of her best friend Detective Phuong Nguyen, and oddly slightly less of Brophy even as their relationship teeters. There’s a bit of a former gang member and general stand-over-man Percy Brash, a big threat from a lurking bloke in a black car, and a lot of driving around on the mean “roads” of Victoria’s Wimmera.

To be honest, there was something that felt NQR about Shoot Through. I don’t think the plot quite achieved the levels of credibility that were attained in the earlier novels. It was a bit all over the place, and had too many skeletons in too many closets dancing about with their strings visibly loosening. Having said that, Stella Hardy has always been a bit of a fringe dwelling character – almost forgivable, chaotic and caring, odd and extremely likeable, and if this is, after all, her last hurrah then she’ll be missed.