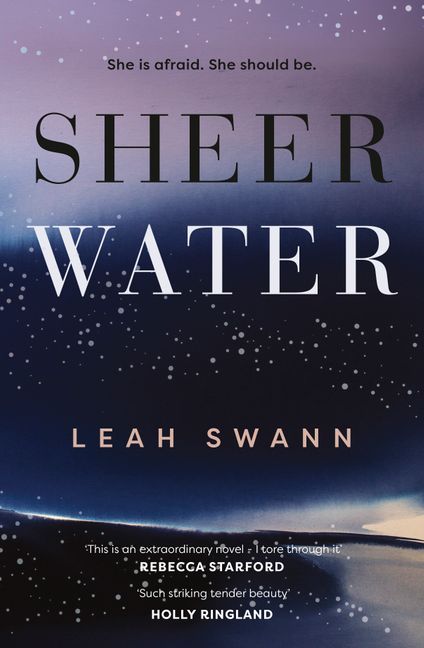 Sheerwater is an emotionally charged work of both hope and despair, beginnings and endings.  Calling this book a thriller won’t be doing it a disservice, but it may give the expectation to the reader that they are about to dive into a work of suspense with no lingering take-homes to mull over.  Sheerwater is a nuanced novel that illustrates how dangerously the pendulum swings when one person in a relationship decides that enough is enough.

On the run from her unstable partner, Ava is cajoling along her two young sons in the car as they head for the Victorian coastal town of Sheerwater.  There is a little holiday house rental waiting for them and also a little time, Ava hopes, in which she may recover her strength and figure out what to do next.  There is much on Ava’s mind, and she is desperate to reach her destination.  A small plane falling out of the sky in front of them is the last thing Ava expects to interrupt her run for freedom.

Trained to rescue others, Ava is exactly the right person who should stop to help at the scene of an accident.  Leaving her two boys in the car with strict instructions not to move, Ava launches into action to save the injured pilot and passengers.  When all the drama is over though, the only one waiting for her in the car is the family dog.  Max and Teddy are gone.

Frantic to find her boys, Ava tells the local police everything she knows and everything she suspects.  Ava’s husband Lawrence has always managed to charm everybody around him and shield the truth of his instability from others but perhaps this time he will not fool detectives who have no prior experience of his practiced ways of deceit.

Like most narcissists, Lawrence is most successful at fooling himself, always firmly believing someone else to be at fault for all the drama and conflicts of his life.  Determined to take charge of the narrative, Lawrence calls a press conference and paints himself as a father desperate to find his children, completely unable to understand why his wife was trying to take two little boys away from their father.

Ava has had good practice at walking around the unexploded landmines of her husband’s suspicions from her time in the family home, but she cannot to do so any longer.  Her boy’s lives are at stake.

Told from the perspectives of Ava, Lawrence, fellow rescuer Simon and Ava’s son Mac, a landscape of life on the edge of the world is beautifully realized in Sheerwater.

Some of the chapter intervals in Sheerwater that speak of the natural world are unnecessarily dense or blousy, which does let down the solid writing present elsewhere. Where we read of Ava battling to keep it all together, or of Max and Teddy trying to navigate and adapt to their hellishly new circumstances, we are held fast to the page in our concern for them.  Max’s scenes are heartbreakingly convincing, as a young child realizes perhaps for the first time that adults don’t always tell the truth or have the best interests of children at heart.  Decisions meant to be firmly in the hands of experienced grownups sometimes become the responsibility of little people not equipped to deal with them. The power of this book is evident when it is not trying so hard to elevate its prose to something a little more literary.

The character of Lawrence is utterly terrifying to read of, and his unravelling when challenged is such a disheartening and suspenseful disintegration to read of, balanced by the determination of Ava to overcome and bring her boys home.  Sheerwater is peppered also with secondary characters of small towns that live and die having experienced such things as loss, drug abuse, racial divides and the endemic scourge of Australian society that is the domestic terrorism of its women and children.

Both a tale as old as time and a believable depiction of the most common crime of our age, Sheerwater is a powerful read of how easily love turns to hate, protection turns to obsession, and how it’s the invisible battles that can be the most devastating.