Men treat women badly. Indigenous Australians are often unfairly targeted. Not all men. Not all indigenous Australians. Enough though to call it out … still, regardless of all that has been said and written about these subjects. She is Vigilante deals with these issues, with strength and purpose … with drama, pathos and humour. Seven writers have written five pieces – performed by a community-based ensemble of 13, predominantly untrained female actors – a number of which are deeply affecting.

Running through the 75-minute show without interval is a series of satirical ads for domestic appliances that can be used by women in self-defence. Each of these fictitious devices is ridiculous in and of itself, but unfortunately personal safety in Melbourne of late has often been compromised … and it is no laughing matter. Just think about the murders of Jill Meagher and Aya Maasarwe, to name but two incidents that readily spring to mind. And that is not to overlook the litany of violent situations involving partners. Written by Maja Amanita and titled Robot Coupe, one ad in particular that stood out for me involved weaponised deadly mushrooms, such as Death Caps.

Showing a great deal of creative thinking, Papillon741929Butterflyemoji, by Roshelle Fong, involves interrogation of an Asian woman for crossing a digital divide. Injected with a truth serum, she is prevailed upon to give up the names of her fellow, anonymous, so-called offenders. Involving five performers, Vigil/ant/e – by Ivana Brehas and Krystalla Pearce –explores rape, rape culture, misogyny and female anger. It finishes with a particularly powerful and heart-felt monologue.

Athena, Huntress of Men – by Lauren Anderson and Meegan May – concerns a young woman who has just finished a long shift. She is trying to get home on public transport in the early hours of the morning when she is confronted by a male who won’t take “no” for an answer. Getting off the tram five stops early to avoid him only serves to make matters worse. Fortunately, that is when a masked guardian makes an entrance, only that doesn’t go according to plan either.

The production ends with a harrowing story involving the treatment of a young indigenous mother by a police officer in the wake of a series of recent abductions and murders of children. The vignette, by Chanella Hosanna Faaalu Faapio Macri, is called You May Not Rest Now. There are Monsters Nearby. 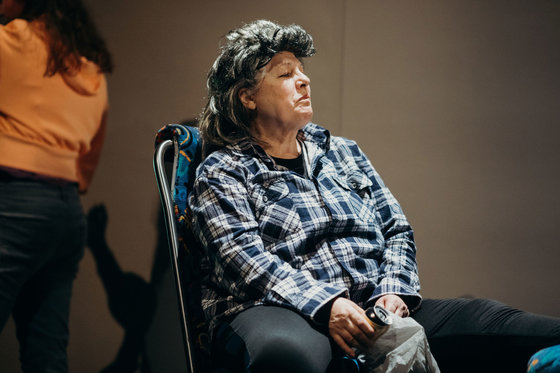 The set, by Bethany J. Fellows, is composed of debris strewn about and a number of old, ripped and burnt mattresses. It creates the appropriate mood. All performances except one, which felt stilted and looked amateurish, hit the mark. Featured are women who stand up, rebel and kick ass. The works are sourced from new and emerging female writers from a variety of disciplines, including television, performance art and multimedia.

Collectively, the five pieces present a damning portrait of society today. The words “entitlement”, “collective responsibility”, “education” and “greater accountability” readily come to mind. Directors Bridget Balodis and Krystalla Pearce have done a fine job weaving together such a rich and powerful tapestry.

She is Vigilante is playing at Theatre Works in St Kilda until 16th November, 2019.