Intrigue is the currency of merit in the intelligent, slow-moving drama, The Sense of an Ending.

Tony Webster is semi-retired. The Internet and mobile phones are foreign to him. He potters around in his small shop which sells expensive second-hand cameras.  Although long divorced from his lawyer wife, the pair remain on friendly speaking terms, especially now that their only daughter is about to give birth to her first child. Fundamentally though, he leads a reclusive existence. That is, until long buried secrets from the past force him to face the flawed recollections of his younger self. This includes facing the truth about his first love and the devastating consequences of decisions made a lifetime ago. 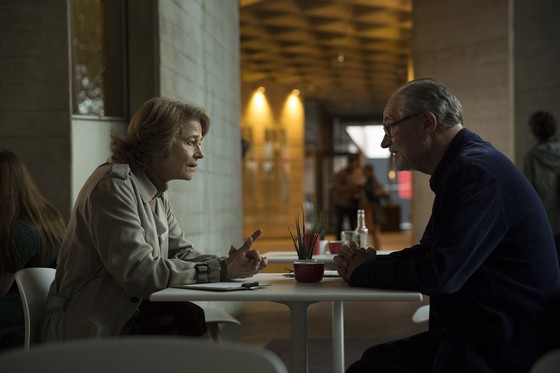 Julian Barnes’ book The Sense of an Ending was a meditation on the fallacy of memory. It was notable not only for its nuance, but for an intricate structure set in two time periods. Further, it was driven by an unreliable narrator whose disclosures (or lack of them) dictated the pacing. The challenge was how to adapt that to the big screen.

Because of the internalised narrative of key character Webster, the film needed to flesh out minor characters into fully formed roles. It had to build upon Webster’s perception of other characters to fully realise the emotional weight of each scene. The screenwriter is playwright Nick Payne (Constellations).

Although the result is intriguing I’m not convinced it entirely works. At times the movie was ponderous and it was definitely confusing. Intrigue is one thing, but you eventually want a pay-off. In fact, after the screening 10 of us – people who didn’t know one another – got together in the foyer to try to unpack what actually happened.

There is no doubt that Jim Broadbent (The Lady in the Van) as Webster is the stand-out. He’s terrific in the role of a man forced by circumstances to take stock of his life. The problem is that as a film I found the material too obtuse, too convoluted for its own good.

While certainly not without merit, I could have done with far more of an explanation or perhaps additional clues at the end … and it wasn’t just me who thought that. Others in our little, hastily convened conglomerate were also perplexed. Rated M and also starring Michelle Dockery (Downton Abbey), Emily Mortimer (Shutter Island) and Charlotte Rampling (45 Years), The Sense of an Ending scores a 6½ out of 10.