A fabulous, fun-filled 90 minutes greets those who venture along to see Senior Moments. It combines some terrific musical numbers with skits and a series of funny voice-overs. Many of the songs are spoofs of familiar tunes, like “Quick Go The Years” rather than “Click Go the Shears”, or “I Am the Very Model of a Modern Age Retiree”, a take-off from The Pirates of Penzance.

A lot of credit has to go to the writers who turn back the clock and reflect on how things used to be. Yes, it is about old people … and the young people they have to deal with. 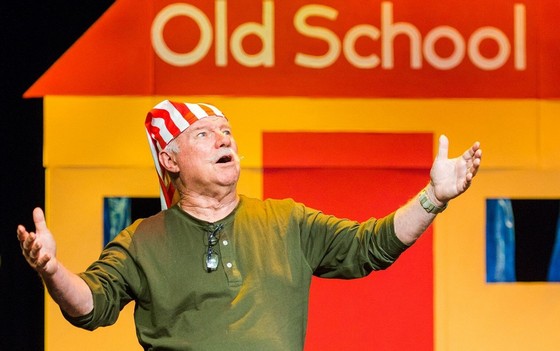 The frivolity starts with the opening checklist of theatre “no nos” (such as those who insist on laughing too loudly or who arrive late) with Max Gillies taking centre stage (gee, he’s a great performer).

So, Senior Moments is a theatrical variety show with sketches and original songs performed by a talented troupe who, as the blurb for the production says, “are old enough to know better”. It’s light-hearted and a little naughty from time to time; but always in a nice way. They play Senior Mastermind and take the mickey out of Romper Room and Play School with what they call “Old School”.

Eight performers make up the cast. That’s if you include the musical director – the man on piano, the maestro from the Midday Show, Geoff Harvey – which I most certainly do. He even delivers a few lines.

Among the others are veteran actor John Wood (Blue Heelers), Play School icon Benita Collings, Russell Newman (A Country Practice) and Kim Lewis (Sons and Daughters). I already mentioned the evergreen Max Gillies. The young’uns are played by Emily Taylor and Christian Barratt-Hill. 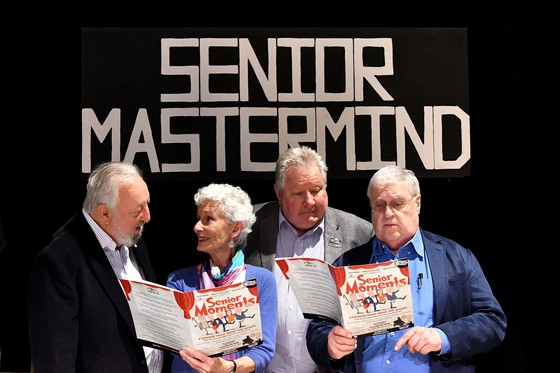 I laughed a lot and surely that’s the ultimate test for a production like this. The show has already had two successful outings in Sydney over the past couple of years and is now on its first national tour.

It is playing at the Comedy Theatre in Melbourne until 18 February. Then it’s off to the Theatre Royal Hobart from 22 to 25 February and Sydney’s Concourse Theatre in Chatswood from 28 February to 11 March.
Next it heads to Riverside Theatres Parramatta (14 to 17 March) and State Theatre Centre in Perth (from 21 to 25 March 2018).