As we take our seat, we are presented with three different actors, all dancing in thought, bouncing off each other and also off their surrounds.  See You Next Tuesday will engage your latent tennis watching skills as the actors playing 17 year-old Evie talk all over each other, picking up on each other’s sentences (being three representations of the one messy being), whilst striding across the small stage and occasionally taking a turn to the side to voice a few words as a male character.  Choosing to focus your attention on whoever is speaking won’t always work, as that stream of consciousness is relentless.   Stay sharp, as you’ve got a lot to process.

It’s good to be challenged from the get-go and Evie’s inner monologue cares little about making you feel comfortable about what it is you are witnessing.  Evie’s inner life is way richer than her outer life – as it usually is of course – and the three faces of Evie all have the ability to see through objects.  You know, like through clothes and walls and things.  It is an interpretive dilemma that the audience may choose to simply accept this as a teenage super power or instead reach the decision that Evie only believes that she is able to strip away the layers and see more than others do.

We are meeting Evie one year into her sexual launch.  Evie is a curiously solitary creature, navigating the looming end of her high school years, attempting to balance her need for fun and sexual experimentation with the reality of needing to be on hand to care for her younger brother as her mother heads out to work at night.   Tuesday is the ‘banging’ night of the week,  where we first find Evie ruminating on the wisdom of her decision to cut off one teenage boyfriend due to a last minute cancellation.  So disrespectful.  A walk home results in a brief sexual encounter with a complete stranger which ends in the promise to do the same again. Tuesday in fact, of the following week. 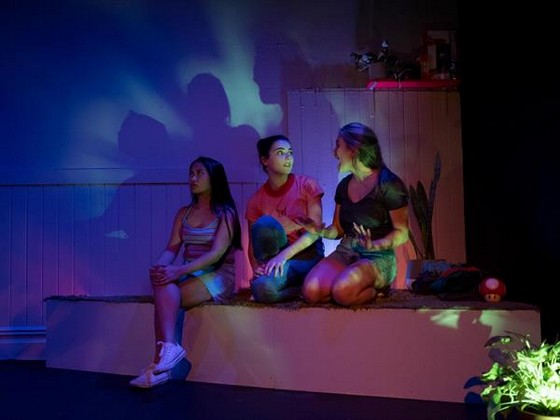 Are we meant to be laughing at the comic-tragic predicaments that our 17 year-old heroine ‘finds’ herself in or are we instead meant to be repeatedly wincing in horror? Is it ambivalence, is it choice, is it circumstance? Whether you currently parent a teen or perhaps you still freshly remember the horrors of being a teenager (both scenarios apply for this particular reviewer) you will find your sensibilities loitering in an uneasy place as you witness the per-occupations of Evie.  With teenage girls as we know, at seventeen you more or less have the finished product. The ideals are there, the moral code has been devised, the interests are established, and the talents have emerged.  Where is this Evie at?

The dominant take-home after viewing this 75 minute production (no interval, so make that pre-dinner drink, served by the very helpful bartender, a single perhaps) is the need to query its intent.  This is dark comedy, the kind that seems to have arisen out of the sense of hopelessness that can infect anyone living in the current age.  Children being the future and all that, are there millions of Evie’s out there living only for the moment, each interaction with the opposite sex a little jewel in their collective teenage murk?

See You Next Tuesday is insightful theatre, snapshotting the experiences of one whilst illuminating those of others also straddling that precarious divide between childhood and adulthood.   Evie doesn’t do much laughing at herself but you might smile at her opposing thoughts.   Evie is strong, Evie can be fragile, Evie will say that she absolutely doesn’t care – and yet she absolutely does care.  About what though exactly is always going to be subject to change.  Such is the way of teenagers.

On one of Perth’s rare truly winter nights, theatregoers fortunately don’t have to travel too far after stashing their chariots in the nearby multi-stories in order to visit the tiny Blue Room Theatre.  Part of the Perth Cultural Centre, The Blue Room is an intimate little haven of a venue in which to experience Perth independent productions.  Have you not visited lately?  Time to do so once again!

See You Next Tuesday is showing at The Blue Room Theatre until Saturday 6 July 2019. Tickets are $30 and are available here.