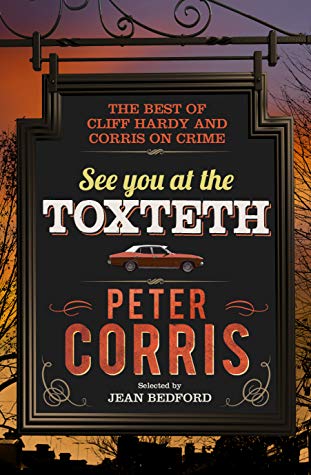 It’s more than fitting that the final word from Peter Corris would be curated by his wife, and long-time editor, Jean Bedford. The chosen short stories are perfect examples of his work, and the ‘ABC of Crime Writing’ is every bit as insightful, acerbic, funny and thought-provoking as you’d want it to be. The columns from Newtown Review of Books are the icing on the very satisfying cake that is See You at the Toxteth.

Those of us who were lucky enough to be around when Corris first started writing the Cliff Hardy novels will remember many of the original collections from which the stories in this compendium come – collections such as Heroin Annie (first published in 1984) to The Big Score (published 2007), the stories that Bedford has selected are Corris writing Cliff Hardy at the height of his powers. They show little gems of ideas, perfectly formed into an arc that’s punchy and precise, and, as always ended when it should. Never an unnecessary word, never a backwards step, never a flinch. Cliff Hardy in written form.

Right back in 1984 there was something incredibly powerful about the Heroin Annie collection. It wasn’t just that we had our own hard-boiled PI by that stage (this was the 5th outing), rather it was something in the assuredness of Cliff Hardy’s place in our fictional world. We were offered a series of crisply written, nicely paced, elegantly structured short stories, at just the right time in the evolution of the Hardy character. At that stage they offered new readers a way into a series that would go on to 42 novels in total. They gave reader’s a sure fire way of knowing what Cliff stood for, who he was, and why this series would continue to grow. They were perfectly pitched from a publishing point of view, and from a reader’s point of view.

This current collection starts out (quite rightly) with Man’s Best Friend and Silverman (Heroine Annie 1984) moves to The Arms of the Law and Tearaway (The Big Drop 1985), then The Deserter (Man in the Shadows 1988), The Big Lie and The House of Ruby (Burn, and other Stories 1993), Meeting at Mascot (Forget Me If You Can 1997), Black Andy and Death Threats (Taking Care of Business 2004) to finally Last Will and Testament and Break Point (The Big Score 2007). A comprehensive meander through an incredibly long career, in which the deftness of the writing and the standard of the storytelling never wavered. I’d kind of forgotten what a master short story writer Peter Corris was until this collection reminded me.

Then into the ABC of Crime Writing and there were points I cried with laughter, there were points I agreed furiously and points I would have liked to have had a dreamed about opportunity to nitpick over for a while, and there were points were I actually felt a bit like crying. Because then I got to the columns from the Newtown Review of Books and realised that even when his health was failing, Peter Corris could knock out words that made you stop and think.

Thanks to Allen & Unwin, Jean Beford and everybody involved in this wonderful collection.