I had an absolutely fabulous time watching this musical. It’s one of the best I’ve seen and while School of Rock was performed in a theatre, you could be forgiven for thinking you were at an AC/DC rock concert. It was full on rock ‘n roll: loud, energetic and loads of fun. Zack (Zane Blumeris) even pulls off Angus Young’s classic move across stage in the second half.

For those of you who have never seen the movie of the same name, School of Rock is the story of a 30-something, overweight rocker who dreams of still making it to the big time. It is also about the empowerment of music, in whatever form, enabling people to be better versions of themselves and giving enjoyment to others. 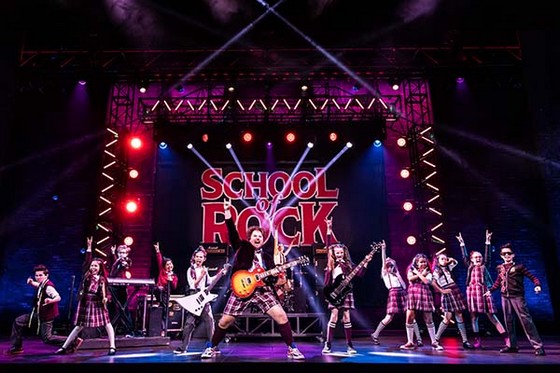 The musical starts off with Dewey Finn (Brent Hill) on stage with his band performing “I’m Too Hot For You”. The other members of the band look like they were stuck in the 70’s with long hair, black t‑shirts, tight pants and the lead singer showing off his muscles, tatts and other paraphernalia by only wearing a long-tassled vest with black jeans that have studs up the sides and around the fly.

Dewey upstages the lead singer, who kicks him out of the band. Dewey is also smooching off his best mate, living in his apartment rent free, until Ned Schneebly’s (John O’Hara) girlfriend Patty (Nadia Komazec) tells him he has to pay rent or move out. So Dewey pretends to be Ned and takes on a substitute teacher job at Horace Green, a very prestigious, private school. Then the fun/chaos begins. Dewey, of course, knows nothing about teaching and slacks off for the first few days, giving the kids recess.

He arrives at school one morning, hears classical music coming from his classroom, epiphany strikes, and he realises he can still enter the Battle of the Bands, but using the kids to form his new band with him as lead singer/guitarist. The kids are a bit unsure as to what this new substitute teacher is up to, but Dewey talks them round to his way of thinking, and has a role for each of them to play, even if they are not actual band members.

The main kid actors are the band manager, Summer (Stephanie Kipnis); Zack (Zane Blumeris) on guitar; Katie (Remy Grunden) on bass guitar; Freddy (Kempton Maloney) on drums; Lawrence (Caleb Elbourne) on keyboard; and the band’s stylist, Billy (Amon Prete). Tomika (Chihana Perera) becomes the lead singer, with the two back-up singers, Marcy (Kayla Muir) and Sophie  (Ruby Moore). And as the voice recording of Andrew Lloyd-Webber informs us at the beginning of the show, all of the kids do play the musical instruments (whereas the adults were only miming and leaving it up to the real band in the orchestra pit).

The kids who make up the Mr Schneebly’s (Dewey) classroom were so incredibly multi-talented and yet still so very young. Each one of them was amazing to watch on stage. I particularly loved seeing Katie twirl her pigtails as she got the head-banger movement going, at one point both going in opposite directions.

The adult cast perfectly complemented the younger cast members, with Ms Mullins, the school principal (Amy Lehpamer) and her offsider Ms Sheinkopf (Michaela Powell) running the school with an iron hand. The rest of the ensemble was either teacher or parent. Brent Hill was fantastic as Dewey Finn, and did justice to the role actor Jack Black had already made famous. His wardrobe was great with baggy trousers, sneakers and a range of really awful knitted vests. The singing talents of Chihana Perera was simply outstanding when she did “Amazing Grace”. How does a voice like that come out of someone so petite? I also liked Amy Lehpamer’s solo Where did the rock go? 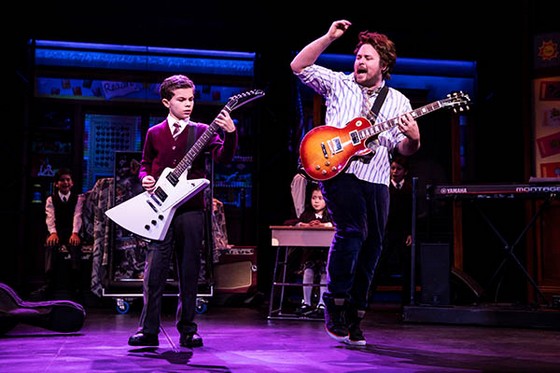 The choreography (Joann M. Hunter) was full of energy and the musical number “Stick It to the Man” was exhausting to watch!

The stage set was exceptionally good, with set and props being whisked on and off between scenes so expertly that it was not distracting ­—moving from bedroom, to school foyer and classroom to backstage at the Battle. Quite often the set pieces and props were moved by the cast themselves. The lighting (Natasha Katz) enhanced the whole performance.

Audience participation is encouraged at the end and I really liked how Brent Hill introduced each member of the cast at the finale. The audience was treated to a spectacular performance and it was great to see that the cast were having fun too. I seriously recommend this one.