Marianne (Marta Dusseldorp) and Johan (Ben Winspear) are cosy in the comfort of their overly-scheduled, boring bourgeois lives … well that’s what they tell a magazine interviewer when being asked about their union. But what lies behind their facade and how long will it be before their imperfect love begins to dissolve? These are the initial questions at the core of Scenes from a Marriage, and the answers, as they unravel, are far from comforting. 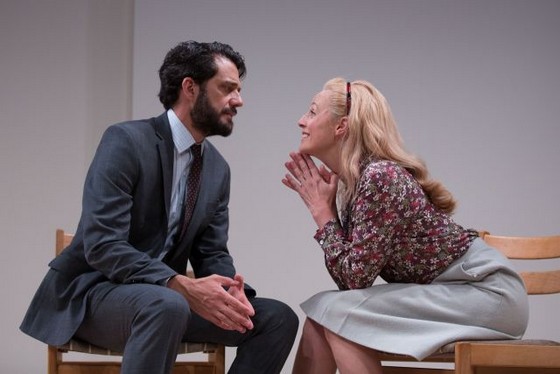 Originally a 1970s Swedish television series by influential filmmaker Ingmar Bergman, Scenes from a Marriage is a beast of a play. The stage adaptation by Australian playwright Joanna Murray-Smith takes audiences behind the scenes into the intimacy of a marriage as it tries to survive secrets and suffering in the shadow of a single event and, over time, innate animosity. With a focus on domestic relationships, it has all the emotional and cognitive ingredients for audience engagement. Yet despite being a polished and visually stunning production with a first-rate cast, its resonance is more satisfaction in a neutrally-beige type way, than standout among a sensational season of shows.

Even to those unfamiliar with the nuance of its Swedish creator, the production is noticeably Bergman. Staging screams Scandinavian in its simplicity, functionality and minimalism, opening as it does to a clinically white and sparely-furnished room. Even when, late in Act One, things open up to the reveal the reality of the couple’s conjoined life in a scene in the their holiday home, it is one of timbre tones affront a tree-lined lake backdrop. The aesthetics are quite stunning, enhanced by lighting that adds a theatricality to the sometimes shocking action on-stage.

The authentic anatomy of a marital breakdown also comes courtesy of well-crafted dialogue that takes audience members from the light relief of predictable jokes through the devastating dynamics of divorce (and what comes next) and contemplation of if whether dislike is better than indifference.

Real-life husband and wife Ben Winspear and Marta Dusseldorp are excellent in their respective roles, presenting the couple as two individual and complexly layered individuals. Their chemistry is clear… unsettlingly so in a physical fight sequence in one of the play’s uncomfortable scenes. Winspear’s glib Johan, shallowly self-assured and over-confidently narcissistic, allows Dusseldorp’s intense and ultimately vulnerable performance to take centre stage. And they are both well-supported by superb performances from Hugh Parker and Christen O’Leary as the couple’s mutually, mercilessly bitter, married friends. 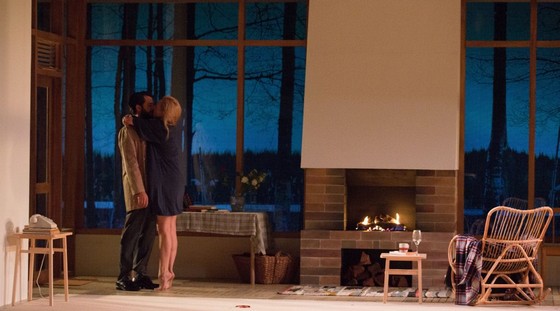 For most of the story, Marianne and Johan are unlikeable people curiously drawn to the mutual misery of their marriage, yet there are also sometimes glimpses of them as ordinary, suffering humans who love each other in their own way…. necessary for audience empathy and investment in their story. Like so often in life, there is no happy ending to Scenes from a Marriage, but its experience brings a satisfaction of sorts from the confrontation of its truth.