A bravura performance from renowned Australian actor Colin Friels highlights Scaramouche Jones. This intoxicating work was written by Brit Justin Butcher in the final months of 1999.

Scaramouche Jones has been a clown for 50 years. Now he’s marking the final hour of his life on Earth. It’s New Year’s Eve 1999, exactly 100 years to the day since Jones was born in Trinidad. His mother was a gypsy woman – a prostitute – and his father, whom he never knew, an Englishman. Jones’ time on the planet has been tumultuous, to say the least. 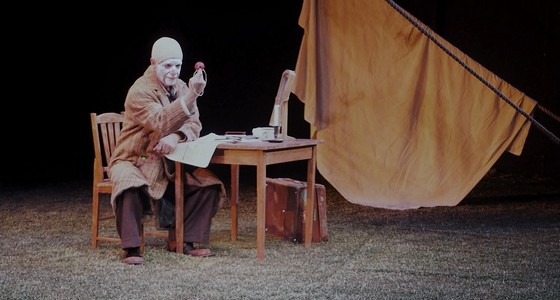 Recounting his life’s story to Trinidad beggars when he first arrived in England 50 years earlier sparked his calling as a clown. Now, having just come from the Big Top one last time, he does so again … to the audience. Still wearing his clown outfit, he regales us with his remarkable tale of survival.

His story comprises seven chapters – what he calls seven “white masks” – covering his time in Trinidad, West Africa, Italy, Poland, at the Nuremberg Trials and in England. This against a backdrop of oppression, pain and death. He relates his tale in a matter-of-fact manner, without undue sentiment.

The minimalist staging – on grass – is wonderfully evocative (the set and costume designer is Richard Roberts), just a couple of thick guy ropes and pegs, indicative of a circus tent.

For the next hour and a half Friels doesn’t miss a beat. He has us in the palms of his hands. He is Scaramouche Jones, raconteur extraordinaire, in his own understated fashion. His turn of phrase, his timing, and his showmanship are impeccable.

Director Alkinos Tsilimidos first saw Scaramouche Jones in 2003 and it caught him by surprise. He hadn’t experienced story-telling theatre like it before. Then, after he worked with Friels at the MTC, they decided they wanted to find another play to work on together. Friels was engaged by the depth of writing in Scaramouche Jones; and he decided to perform his first one-man show. 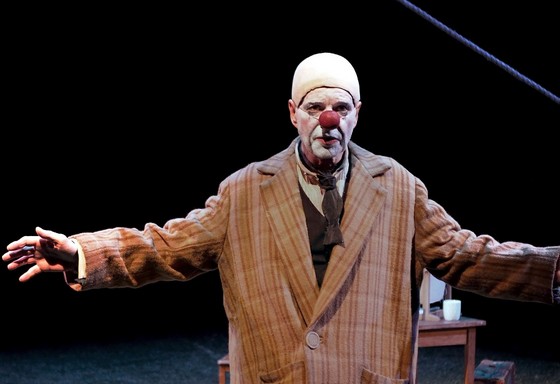 Justin Butcher incorporated many of his favourite ingredients into the play. They include a lifelong fascination with clowns and the fate of a lost race stranded in the backwash of the Colonial era. The boys’-own yarn-spinning of Arthur Conan Doyle and Rudyard Kipling, blended with the upheavals of populations and cultures through the 20th century.

At its heart this is a beautifully crafted story of love and loss, of triumph against the odds, of a life well lived against seemingly insurmountable obstacles. Colin Friels’ Scaramouche Jones is a not-to-be-missed experience of the finest kind. Bravo! It’s playing at Fairfax Studio, Arts Centre Melbourne, until 25 August 2018.