Well meaning, but heavy handed, All Saints tells the true story of a church at the edge of extinction.

After trading in his corporate career to become a preacher, Michael Spurlock (John Corbett) finds his first assignment is a quaint country church with only a dozen members. The job comes with a catch: he has to close the doors for good and sell the prime piece of land on which it sits. Developers eagerly eye the property while the congregation mourns the inevitable. But Spurlock and his family – wife Aimée (Cara Buono) and their 10-year-old son Atticus (Myles Moore) – look forward to moving on to an established church where they can put down roots. 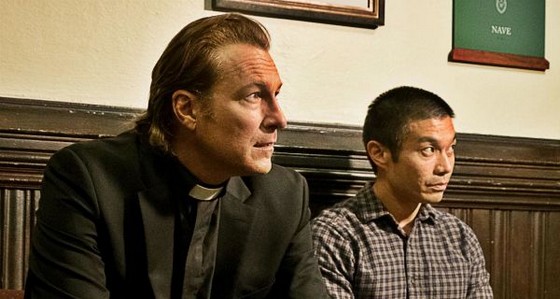 But when All Saints hesitantly begins welcoming Karen refugees from Burma – former farmers striving for a fresh start in America – Spurlock feels called to an improbable new mission. Toiling alongside the Karen people, the congregation attempts to turn its fertile land into a working farm to pay the church’s bills and feed its newest people.

Spurlock must choose between completing what he was assigned to do or listening to a small voice inside his head. And by ignoring his superiors, he jeopardises his family’s future.

Overall, there is an amateur-hour feel about All Saints. This is not the first time I’ve thought that about movies that have religion at their core. Not that religion per se is the problem here, rather it’s clunky scripting and heart-on-sleeve performances.

Don’t get me wrong – the story is a moving and relatable one. But the way it is told felt contrived from start to finish. It screamed “telemovie” for me; and unless you are a true believer, I dare say it will strike you the same way.

The fact that the events depicted actually happened made me want to turn to the filmmakers and ask “Did you really need to make it look so manufactured? Surely that was not what you set out to do?” Nuance and subtlety are missing.

That having been said, because I am such a soft touch, I still managed to shed the odd tear. So All Saints – though far from perfect – is not a complete failure on an emotional level. Rated PG, it scores a 4 out of 10.