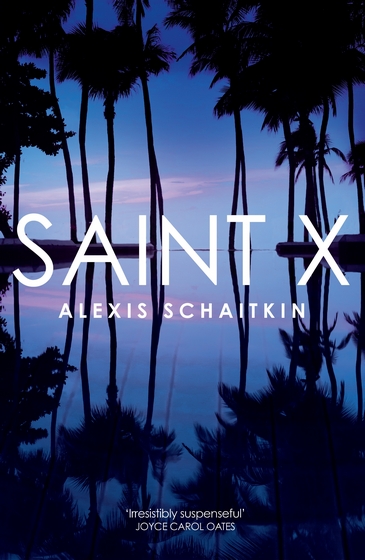 Saint X is a work that requires you to commit to the process of thoughtful absorption, considering such weighty issues as racial and social divides and the cultural displacement of economic immigrants.  If you were after a racy little island mystery, you will not find that here.  What you will receive instead is the meticulous examination of the aftermath of a murder upon both poor and privileged.

Alison is everyone’s teenage girl, thinking herself more mature and capable that what she actually is. Taking her annual family holiday on the Caribbean island of Saint X, Alison is bored in that unique way that only pampered people can be when there is little to truly be upset about.  Wanting a story to take home from Saint X, Alison needs to assess her options closely. Will it be the boy from Yale?  Or will she look outside of her circle entirely?

Claire should perhaps be jealous of the attention her big sister Alison receives, often at the expense of herself, but she just can’t be. Alison is everything to Claire and her parents, despite the energy Alison devotes to cultivating a persona separate to that of sister and daughter.  When Alison disappears, Claire knows there must be more to it than what she is being told.

Alison’s body is discovered two days after she goes missing, and accusing eyes turn towards Clive and Edwin, two workers at the Indigo Bay resort who had been noticed paying attention to the pretty American girl.  Not the first time Edwin had put his considerable talent into charming a tourist, but it would be the last.

The opening chapters of Saint X are devoted to scene setting, with a careful arrangement of characters both inserted and native to its beautiful yet impoverished (fictional) community. It’s a curious way begin a novel, and these pages seem to be a direct challenge to the reader to have this backdrop completely nailed before the serpent is introduced to paradise.

Saint X is a novel populated with the haves and the have nots. There is a lot of time given to the exploration of grief and the ripple effects of a crime that extends beyond the lives of the accused, beyond the surrounds of the family of the victim.  Teenagers so desperately wanting to start their lives as adults that they engage in idiotically dangerous activities is a tale as old as time.

Viewing the above more impatiently, the emotional dumping aka navel-gazing (by little sister Claire, as she reflects as an adult) does drag on long enough that a reader would be forgiven for skipping ahead. It’s just unnecessary filler weight that makes the middle section of the novel a hard trudge.

What is appreciated about Saint X is that the view we are presented with is so long and large.  We receive small but incisive anecdotal insights into the involvement of the bit players, and greater insight into Claire and Clive, two people who crossed paths before a murder and who cross paths again so many years later.  What may have changed in both of them, and does time give a better perspective?