I decided to watch Russian Doll when I saw Amy Poehler was one of the show’s writers and producers. But if you think this show is going to be a light Parks & Recreation-style comedy, think again. It is a comedy but it’s dark – a fact the writers specifically acknowledge in one episode.

The “elevator-pitch” version is that the show is about a woman who keeps dying only to be shot back in time to re-live the same day over and over. But before you can say Groundhog Day, it’s  evident early on this is along way from an 80s rom-com. 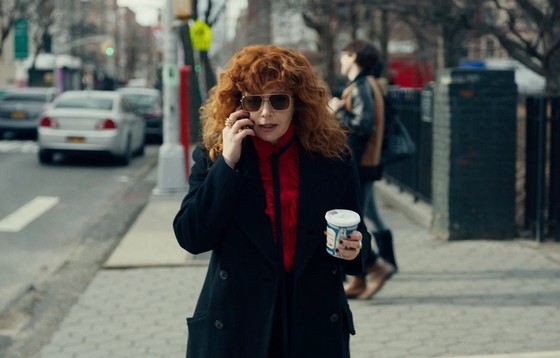 Natasha Lyonne plays the woman, Nadia. She’s attending her own 36th birthday party – a bash thrown by her best friend Maxine (Greta Lee). She finds herself in the bathroom staring at her reflection in a mirror when she’s interrupted by a knock on the door. Re-joining the party, Nadia shares an “Israeli joint” with Maxine, before noticing Mike (Jeremy Bobb). One thing leads to another and Nadia leaves with Mike. But fate will intervene and Nadia is hit by a car and killed. But she wakes up back in front of the mirror, the same song playing in the background from the party. This time-loop repeats continually, no matter what Nadia does differently. Understandably, she starts to question her sanity. But when Nadia encounters Alan (Charlie Barnett), she discovers he might hold the key to the mystery.

The series consists of only 8 episodes; but it takes a little while to get going. The first few eps lay a lot of necessary groundwork; but – perhaps intentionally – they don’t really go anywhere in themselves. That changes when Alan appears and the story really takes off. I’m not a particular fan of binge-watching, but I definitely recommend it with this show. Once I got past that slow start, I was hooked.

One other thing to note is that Nadia isn’t a particularly likeable character. She’s best summed up, I think, by a quote from a podcast*, which described her as “a particular kind of New York dirtbag”. At one point, another character calls her “the most selfish person I know”. So, yeah, she’s a piece of work. But by the end of episode 8, I felt I knew why she was that way. And for all her flaws, I was willing her to find the solution to the mystery.

The writers find ways to use the time-loop device to explore other, deeper, concerns. One episode highlights the plight of the homeless. Another looks at the consequences of betrayal. Another still deals with self-harm. Like I said, this isn’t light stuff. It’s dark and confronting. But the show’s tapestry ends up providing a compelling conclusion. In fact, I think the last three episodes are flat-out brilliant.

Natasha Lyonne (Orange is the New Black) gives a fantastic performance in the central role. As noted, Nadia isn’t a likeable character; but Lyonne manages to find the light beneath all her darkness. Charlie Barnett (Chicago Fire) is her polar opposite as the buttoned-down Alan, and does a great job exploring the character’s neuroses. The remainder of the cast largely revolve around these two, but Jeremy Bobb (Escape at Dannemora) convinces as the sleazy Mike (he crops up in unexpected places); as does Yul Vasquez (The Looming Tower) as Natasha’s ex-boyfriend John.

I’m glad I persisted with Russian Doll. I was feeling a bit lost after episode 2; but the show’s slow build pays off is richly in the end. It’s now streaming on Netflix.