Celia Pacquola seems to be everywhere at the moment. Her regular appearances on shows like Have You Been Paying Attention? and The Project mean she’s a familiar face. And you may recall how she shone in straight role in the ABC’s political satire Utopia. But if that’s not enough Pacquola for you, you need to tune into Rosehaven, also on Aunty. 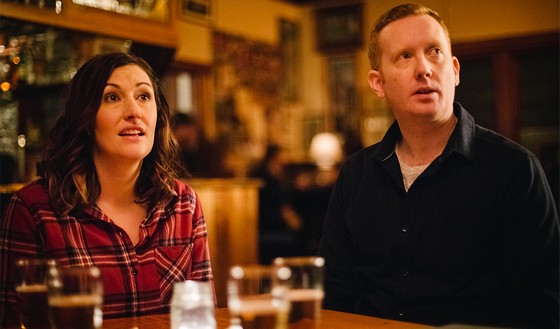 This gently humorous show set in rural Tasmania is the ideal antidote to loud, angry television. Created by Pacquola and real-life friend Luke McGregor, Rosehaven gives you half an hour of the kind of observational comedy that’ll have you smiling before you even realise you’re doing it.

McGregor plays Daniel McCallum, a dutiful son who returns to the small town of Rosehaven to help his mum Barbara (Kris McQuade) out in her real estate business. No sooner has he settled in than his best friend Emma (Pacquola) arrives in Rosehaven having fled her marriage – while still on honeymoon. Before long, they’re all working in the real estate agency – with varying degrees of success.

The series is now up to season 3 (yes, I should have written something a while ago – I know). This season sees Daniel and Emma in a platonic house-sharing arrangement. Daniel is in a relationship with local doctor and childhood sweetheart Grace (Katie Robertson). But he remains piqued at the petty traumas of growing up in Rosehaven. Emma meanwhile is still finding her feet in a town whose greatest claim to fame is having an “emergency butcher”. For her part, Barbara is a hard-nosed businessperson, and an even tougher mother.

You could almost see Rosehaven as a British series set in some out-of-the-way village – the type of show that wins BAFTA TV Awards. But it retains both a distinctly Australian and uniquely Tasmanian perspective. It certainly doesn’t play into the crude stereotyped ideas some “mainlanders” have of Tassie; but at the same time is happy to leverage quirkiness as an asset.

Rosehaven relies on a gentle observational style. Don’t expect prat falls or car chases. It’s generally pretty understated, although I often find myself laughing out loud. It depends what flicks your switches I guess. Conversely though, you might also find some storylines hitting close to home.

Pacquola and McGregor gleefully bounce off each other as Emma and Daniel. Here Pacquola gets to be the “loud one” in contrast to McGregor’s rather neurotic Daniel. Kris McQuade makes the most of her role as the hard-bitten Barbara. The supporting cast include Noela Foxcroft as Mrs Marsh, the office receptionist; and Kim Knuckey as the town’s laid-back and pragmatic police officer.

I’m happy to admit I can’t get enough of Rosehaven. Sadly each season is only 8 episodes long, but if you’re just coming to it, at least you’ll have 24 episodes to binge if you want to. This is simply great Australian television – get into it.

Rosehaven is now streaming on ABC iView; with new episodes screening on ABC 1 on Wednesday nights.