The pre-show soundtrack of “Teenage Dirtbag” type songs seems to be an apt choice ahead of La Boite Theatre’s Romeo and Juliet reminding its audience of the youth at the core of this story of vulnerable teenagers infatuated in spite of their familial-tie expectations. We see it on stage also in the show’s performances and presentation of Juliet (Darcy Gooda) as a particularly precocious, shouty teenager in contrast to her Romeo (Jack Bannister), in disservice to the poetic rhythm and imagery of the language of arguably the Bard’s best known work, regarded by some as one of the greatest love stories of all time. 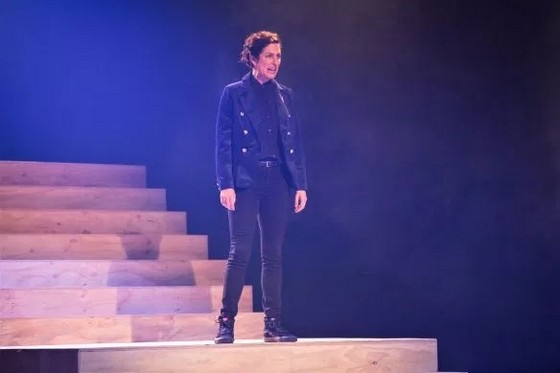 This is Romeo and Juliet reworked for the 21st century, seen in the details embedded throughout what is still an essentially traditional take from La Boite Theatre in collaboration with QUT Creative Industries (final year acting students appear in the cast alongside some of Brisbane’s best actors). There is no prologue or epilogue to bookend the tale of woe, not that we need them. Nor a happy dagger Juliet declaration of intent to join Romeo in death in the Capulet family tomb. But there is an obvious contemporary energy to the violent delights of the stage’s traffic in this 21st century re-imagining of Shakespeare’s iconic love story.

Even with this as a lens, there appears to be a potpourri approach to its execution, with some only-early CGI and just one lone later live musical number. There are, however, the start of some interesting staging ideas within and upon its deceptively simple looking stage and through modern costumes, including pops of red motif featured throughout (set and costume designer Anthony Spinaze). There is no Verona balcony or Luhrmann-like fish tank, though these scenes are still instantly recognisable. And a sublime lighting moment in Romeo’s approach to Juliet’s ‘balcony’ is over all too soon. The Capulet party at which the star-crossed lovers first meet is an aesthetic explosion, however, the dialogue shared ahead of the doomed couple’s first kiss is lost under its soundscape.

It is the fight scene that facilitates the show’s most memorable moments. The high-energy highlight serves as the story’s turning point due to its sudden, fatal violence and also because of fortune’s fool Romeo’s resulting banishment for killing Tybalt (Wei Lan Zhong), his new wife’s cousin, in revenge for Tybalt killing his close friend Mercutio (Grady Ferricks-Rosevear). In this exciting realisation, this is enhanced by stylised but realistic sword play (movement and fight director Nigel Poulton) and a thrilling soundscape (sound designer Anna Whitaker), making Tybalt more “Kill Bill” Black Mamba Bride than Prince of Cats, measured, deliberate and even classy in her artful consideration before every sword clash before her death.

Regardless of its contemporisation, this Romeo and Juliet is all about making meaning for its audience and it is wonderful to see people reacting to the humour of the text. Perhaps as Shakespeare intended, the show’s bawdiness gets the biggest laughs, mostly from the brilliant Bridget Boyle as Juliet’s Nurse (also in double duty as the Prince of Verona).

The supporting cast is very strong. As the saucy merchant Mercurio Ferricks-Rosevear bounces about that stage with Romeo’s cousin Benvolio (Nicole Hoskins), making Queen Mab attempt to calm melancholy Romeo’s fears on-route to their surreptitious attendance at the enemy Capulet family party in the hopes of encountering the unseen character Rosaline, for whom Romeo feels deep feelings of love. His physical, energetic performance carries the show’s early weight, and when his bawdy witticisms give way to his dying words, the mood is of sorrow rather than vengeance, which wisely makes its foreshadowing subtler than is the norm. The Friar (Eugene Gildfedder), too, is given a more sympathetic imagining, showcasing the cleric’s guilt for his involvement in the situation, and although his scenes are necessary for foreshadowing purposes, they do drag a little at times. Jack Bannister makes for an excellent Romeo, bringing the script’s language to life with an eloquence that heightens the shrillness of the childish Juliet. 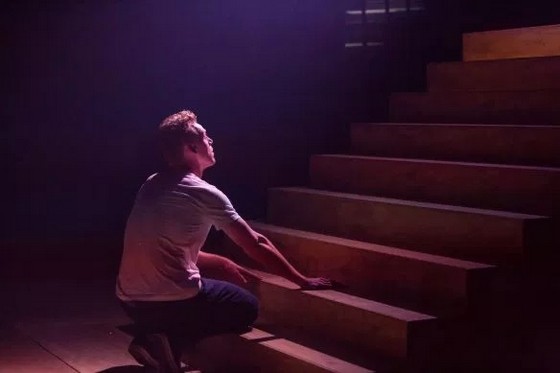 Despite its staging and script changes, this Romeo and Juliet still feels quite traditional. After a word-heavy second half, its ending is compelling in its sorrow but also cathartic as the show’s 105-minute (no interval) running time feels like hard going. For those who know little of the tragic story of two households and the rest, this Romeo and Juliet represents a rewarding way into the unfamiliar. Those who think it is unmatched in the dramatic cannon, will likely revel in its experience. However, if you’re already just ‘meh’ about what you consider to be a satire about fickle youth, then it might not be the production for you.