Alfonso Cuarón has never been easy to pin down. The Mexican director has slipped effortlessly between genre films (Children of Men), Hollywood blockbusters (Gravity) and human dramas (Y Tu Mamá También). Now Cuarón draws the strands together in Roma, a film that’s paradoxically both his most ambitious and his most intimate to date. 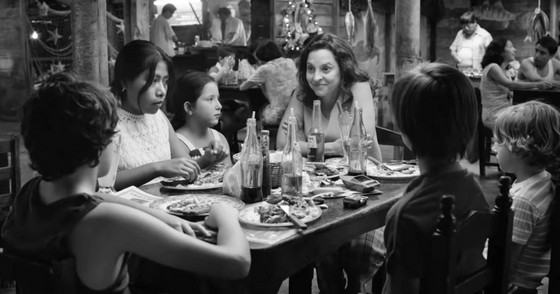 Before getting into the film itself, you should note Roma’s its distribution model. Produced by Netflix, the film is showing in limited cinema screenings in Australia (as in the US) from 7 December 2018; before being available on Netflix from 14 December. Without going into all the controversy and reasons behind it, this could precipitate a shift in how films are delivered to both cinema and home audiences.

But back to Roma. The title refers to a suburb of Mexico City. It’s home to a wealthy family with three children. Although their mother Sra Sofia (Marina de Tavira) and grandmother Sra Teresa (Veronica García) don’t work (it’s the early 1970s after all), it falls to maid/au pair Cleo (Yalitza Alparicio) to care for them much of the time. Cleo and fellow maid Adela (Nancy García García) share an odd relationship with the family. Their employers are generally kind and supportive, but at the same time, they’re kept at a distance – both physically and emotionally. Cleo has been seeing a young man, Fermín (Jorge Antonio Guerrero). But when she falls pregnant to him, the lives of everyone around Cleo will be changed forever.

Roma is a film of contradictions. It’s simultaneously an intimate portrait of a woman and a monumental examination of recent Mexican history. It’s the story of a family; but also the story of rapidly changing times. It delves into deeply personal emotions, but also into huge issues of class and race.

Cuarón seems to be channelling Italian neo-realism here. For a start, he (as DOP) films in crisp black-and-white. He doesn’t use a musical score. And he employs several motifs (notably aircraft flying overhead) in the film. Even the title alludes to Italian cinema; perhaps even directly to Roberto Rossellini’s Roma, Città Aperta (Rome, Open City [1945]).

Aside from being his own cinematographer, Cuarón wrote the screenplay (and edited the film by the way) based on his own personal experience growing up in Mexico City. Indeed, the real-life Cleo is apparently still alive. That personal connection bubbles away under the surface of the film. Clearly this was a passion project for the director. But the strength of his commitment really shows in the final production.

He also paces the film, well, deliberately. Some will find it grindingly slow; but I got into the rhythm of it after a while. And be prepared for shocks. After allowing the film to meander along for a while, Cuarón flips it into furious action. That in turn leads to one of the most heartbreaking scenes you’re ever likely to experience in the cinema.

Roma is a tapestry of filmmaking. Each thread is carefully laid out, and is beautiful in itself. But it’s only when you’ve got enough threads that you can step back and see the full picture. That picture is far greater than the sum of the individual threads.

The one thing I found a little negative was a scene late on in the film. Without giving anything away, it involves a significant incident. But Cuarón really telegraphs the incident pretty obviously, lessening its impact . That really is a only minor quibble however.

Roma is plainly a major achievement for Cuarón. This ambitious, intelligent film is a deeply moving story that will resonate if audiences give it a chance. I suspect its slow pacing and stylistic flourishes will prove distancing for many; but if you’re into art-house cinema, it’s well worth a look – either in a theatre or at home.