Robot Song is an energetic, highly creative new work from Arena Theatre Company – and specifically writer, director and designer Jolyon James. What a wild ride it is, but one well worth taking. The love and laughter in the room on opening night were infectious. 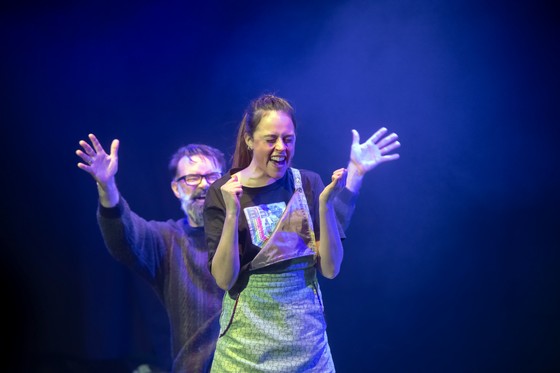 Eleven year-old Juniper May (Ashlea Pyke) is in her final year of primary school, but she hates it because she’s picked on. She likes art, music, computers and YouTube … and loves robots. She’s even called “Robot” at school, where others perceive her as distant and cold. Her worst moment comes when she’s presented with a truly horrible letter signed by all her classmates. They call her “a total freak”, say they wish she was never born and tell her nobody wants her at the school. No wonder she doesn’t want to go back there.

Juniper, who has many nicknames coined by her artistic father (Phil McInnes), sees the world differently. She makes up words that are meaningful to her, writes most things down and thinks it’s cool there are words within words; like “eat” in “breathe”. Her dad has taught her to appreciate an amazing robot named Battletac from an ‘80s Japanese television series (though only 10 episodes were made). She spends countless hours playing with the contents of a recycle bin she’s “befriended”.

Robot Song, which unfolds through dialogue and music (and a little audience interaction), manages to cleverly turn around Juniper ‘s feeling of despair has into hope and promise. Without spoiling the surprise, part of that is achieved from Juniper’s contact with a whiteboard. The show includes a lot of animated, animatronic and tactile elements and it benefits as a result. A reveal near the end is totally joyful and represents the cherry on top.

Robot Song plays on the wide-eyed innocence of being a child – just letting your imagination soar. It’s family-friendly.

The three performers – who also include Jo Abbott on keyboard as Juniper’s mum – pour their hearts into the work. From Pyke’s first appearance on stage, she’s no wallflower. She makes for a charismatic central character. Both she and McInnes are accomplished singers. He’s a very natural performer who can make you believe that whatever his character imagines is real.

Creator Jolyon James was inspired to craft Robot Song after one of his two sons was diagnosed with autism. James grew up in a family of professional artists. Over the past 40 years he’s been squirrelling away ideas he thought might someday be useful. This is the outcome. He had already built a WALL-E style robot and creative projects had always been part of the interaction he had with his offspring. In fact, he would go so far as to say these were often their clearest moments of communication. 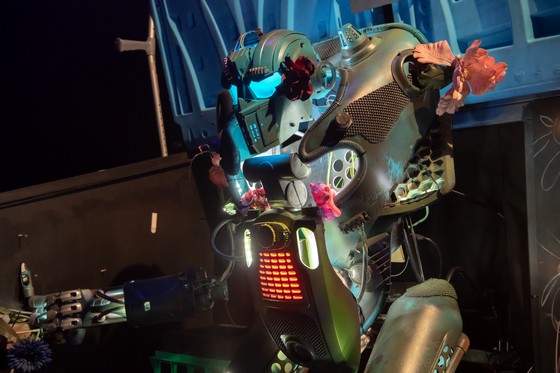 As James puts in in the program that accompanies the musical play, “Robot Song is primarily a personal reflection about parenting and the profound ability creativity has to cut through when language fails.” Hear, hear, I say. Let’s have more of it … especially if material this good can come out of it. Then, and only then, can the love be spread around in a world desperately in need of it. Nate Gilkes is the composer and Ania Reynolds the musical director.

An hour long, Robot Song – a celebration of diversity and being your own person – is playing at Theatre Works until 13 April 2019.